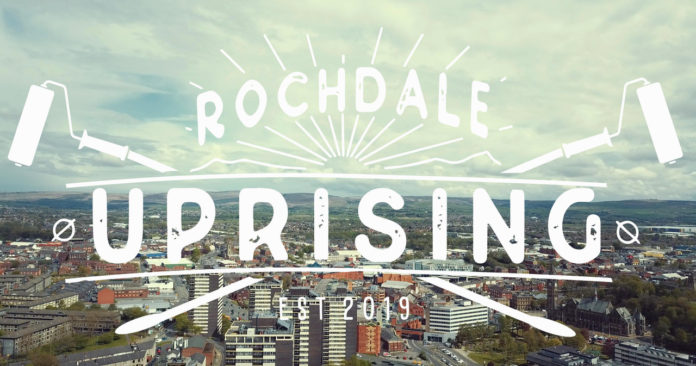 The festival will feature large scale murals, an exhibition, an art fair, workshops, artists talks and much more, all accessible for free to the general public for all ages and cultures.

World renowned artists will travel to the town and adorn its drab buildings with beautiful artwork inspired by Rochdale’s rich heritage. The Primary aim for the first edition of Rochdale Uprising is to breathe life back into unloved and neglected parts of the town through a series of iconic murals, showcasing local and internationally renowned artistic talent as well as some of the diverse networks of creative organisations in and around Rochdale and Greater Manchester.

Hayley Garner, of Nomad Clan, speaks of the launch, “One of the core motives for running a mural festival in Rochdale is to inspire and engage the young people through direct visible action. As someone who grew up in Rochdale, I remember an absence of art culture and a lack of artists to aspire to. One of the many strengths of urban contemporary art is how readily available and accessible it is, turning the streets into a gallery that only inspires imagination as opposed to the traditional elitist galleries that some people would never access.

“If someone had told me that I would have a career in muralism that would find me travelling all over the world, sustaining a comfortable living and having some of the richest life experiences I could imagine, I never would have believed it. “

On Friday 23rd August, there will be the opening party gallery show and launch of the festival. Located at the Urban Artistic Gallery, Drake Street and Nelson Street corner, the party will be from 5pm to 9pm, there will be free drinks sponsored by Northern Monk and a first pick at the fantastic art for sale.

Moving on to Saturday, 24th August, OverDrawn will take over the Baum in Rochdale. From 7pm to 10:30pm every surface will be covered in white paper for spectators and the public to draw onto, accompanied by great music and spectating talented local illustrators. Reducing the barriers of anxiety around drawing, OverDrawn have established a name for themselves by mixing artists and the public in one space and putting everyone on the same page during an incredibly social event.

Then, during Sunday 24th August, there will be a series of talks by artists at the Rochdale Market and Food Hall from 2pm to 4pm. Giving festival goers the chance to quiz the artists and openly discuss topics or issues or simply listen to what these creative minds have to say. These talks will feature Yasha Young, the director and brains behind Urban Nation; Kelzo, a veteran of the graffiti world; and London Police, one of the most stylistically recognised duos in the urban art movement. Each talk will be a question and answer style ‘15 minutes of Focus’.

Nomad Clan believe that Rochdale Uprising will encourage the community to feel a sense of ownership, renewed pride, and inspiration for change and economic growth through tourism. The duo of Cbloxx and AYLO – aka Joy Gilleard and Hayley Garner – have been travelling the world with their talent from Mexico to Germany, to America, France and across the UK, so it seems only right to return to Hayley’s hometown of Rochdale to host the first ever Street Art Festival and celebrate Urban Art, in all its glory.

Enter £2 raffle to be in with a chance of winning a house and...