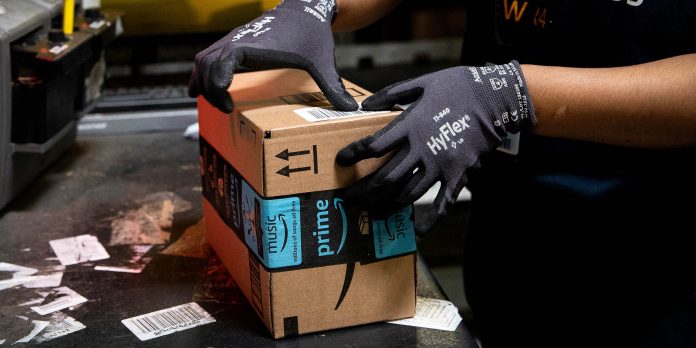 There is no doubt that it has been the toughest 12 months for the majority of businesses. The Covid-19 pandemic combined with Brexit, has made trading conditions simply impossible for thousands of businesses. Amazon stands out as one of the few businesses to have thrived during the global Covid-19 pandemic. Now, the new Brexit rules affecting the trade between thousands of UK small businesses and their EU customers, are set to push even more revenue into the hands of Jeff Bezos’ ecommerce behemoth and its FBA service.

Following the Covid-19 outbreak in early 2020, share prices around the world tumbled.  Huge numbers of businesses without Government support failed. Many millions more continue to suffer. But there have been some success stories. Some businesses have even thrived during the pandemic. Amazon is one such business, and it’s set to thrive even more as a result of Brexit. At the start of the pandemic, the e-commerce giant sported a valuation of around $920 billion. After the stock bounced back from the initial coronavirus market sell-off in March 2020, it hit new record highs. The company was worth $1.49 trillion by the summer. It is now worth almost $1.7 trillion. It is no wonder that the online ecommerce business has thrived given high-street shops have been forced to close for long periods of the year. Quite often, the only access to certain consumer goods is via ecommerce and courier services as provided by Amazon. This reality was underlined by the fact that the online retail giant’s 2020 financial results. These revealed Amazon’s UK sales jumped 51%, from $17.5bn to $26.5bn in the year of the pandemic.

UK retailers might rely on Amazon FBA for selling into Europe

Despite Amazon’s staggering sales growth, you don’t need to look far for debate surrounding aggressive tax avoidance and digital sales tax. Just yesterday Amazon was criticized for paying less tax than British bricks and mortar retailers. As a result, Tesco has called for a 1% sales tax to be levied on online competitors, including Amazon. Amazon insists that it pays its tax and creates 1,000s of jobs in the UK. Either way, traditional bricks and mortar retailers in the UK might not be thrilled to discover that new Brexit rules are likely to push more business into the hands of Amazon. However, some of those retailers may find themselves relying on Amazon’s help when selling into the EU.

What is FBA (Fulfilled by Amazon)?

Amazon’s great strength lies in logistics. Even shoppers that don’t like the ‘idea’ of Amazon, will often still opt to purchase via the platform as opposed to purchasing direct from the original manufacturer. This is because Amazon can deliver your item faster. Amazon offers ‘order fulfilment’ for sellers known as FBA (or ‘Fulfilment by Amazon’). But what is FBA? FBA means that the seller can send a batch of their products to Amazon, for Amazon to package and dispatch directly from the Amazon warehouse. Therefore, the seller doesn’t have to deal with their orders directly and one-by-one. Amazon’s logistics are so advanced, your item can arrive to your doorstep the very next day, rather than taking a few days to be delivered when you buy direct from the manufacturer. It is this ‘FBA’ service that is set to increase Amazon’s market share as a result of Brexit. Why? Because UK-EU order fulfillment has become a nightmare for small businesses.

Brexit a nightmare for small businesses

As a result of new rules, regulations, and costs resulting from Brexit, many European businesses are reported to have decided not to export to the UK at all. For small businesses exporting from the UK, there are complaints of labourious new administrative barriers. Seven page forms for each small item exported. A process that previously took seconds. As well as additional Brexit related costs including VAT and duty. These extra costs hit small businesses proportionately harder as every small consignment attracts a charge. However, the most alarming realisation for many small and medium businesses we spoke to is that customers are being held to ransom by couriers collecting taxes and duties at the point of delivery. Customers have, unsurprisingly, been left angry or have refused to pay the VAT altogether. This has left a mountain of goods floating around in no-mans-land, stuck somewhere in the distribution chain.

Just over a month after the UK finally left the European single market and customs union – amid claims from Boris Johnson that its people and its businesses were now free to live and trade as they wished – UK companies exporting to the EU, and EU ones that send goods here, are beginning to voice their disappointment. More importantly, so are their customers. The Chamber of Commerce says requests for help are coming in ‘thick and fast’ amid cost increases and confusion about red tape. More recent reports cited several UK businesses being advised by UK Government officials to set up European business hubs to process and dispatch their goods from within Europe. This, of course, is not viable for many businesses. Which is where Amazon is expected to benefit – removing much of that burden from sellers via their European market fulfilment. Some companies will no doubt find it much easier having a third-party operator take care of dispatching and fulfilling their orders as opposed to setting up an EU based version of their business.

Amazon will be faster in overcoming distribution obstacles

Of course, Amazon also needs to deal with problems arising from Brexit too. But the company is well placed to fulfil orders from territory specific hubs. For example, as a result of the Brexit deal, Amazon is reported to be moving quickly to open its first packing and distribution warehouse in Ireland. This will allow it to avoid delays brought by new Brexit trade arrangements. The Irish Times reported that the retail giant wants to use a 650,000-sq-ft unit at a business park in Baldonnell, west of Dublin. If the deal goes ahead, customers are expected to receive Amazon purchases faster, as many items are currently dispatched from the UK. Importantly, it also means that sellers can distribute bulk orders to the Amazon warehouse for sales and fulfilment. Rather than dispatch each item individually, together with the admin that entails. Significant numbers of small businesses are already reported to have withdrawn their direct sales to and from the EU, leaving only their Amazon listed items for the company to fulfill into European markets.

FBA into EU markets is appealing for small businesses

One business owner, Lizzie Houghton, who runs Moleroda, a small business employing 25 people in Wiltshire, gave us her take. The company manufactures and exports polishing and finishing tools to Europe. She told us “It’s still early days, but on the face of it, the administrative burden on small businesses seems quite significant. “Our customers are unhappy at being charged VAT by couriers. Additionally, the paperwork we are required to submit with each small item, which in the past took seconds, is staggering.” “Hopefully we can overcome some of these teething problems and the Government can look at ironing out these issues.” “We’re looking at expanding our sales on Amazon because Amazon fulfilment in EU markets seems very appealing compared to the amount of paperwork required for us to ship each item individually.”

FBA is giving Amazon the edge during Brexit trade issues

Moleroda isn’t the only company seeking to trade via Amazon rather than fulfill orders directly. Specialist Amazon marketing agencies have seen a sudden uplift in custom since the Brexit deal was announced in January. James Pitts-Drake who runs Optimizon, a specialist London and Swindon based Amazon agency helping clients increase Amazon sales, said: “We’ve seen a huge surge in enquires from companies seeking to fulfil more of their sales through Amazon. “Amazon is the largest ecommerce marketplace on the planet. It is also still growing at a staggering rate. Therefore being successful on Amazon should be a priority for retailers even during ‘normal’ business conditions.” “However, when you look at the difficulties some businesses are currently experiencing with EU sales, and then consider the logistical support that Amazon can offer for fulfilling orders in Europe – I think we’ll witness more growth from Amazon in that marketplace.” “Amazon could hold the answer for many UK many businesses hesitant to setup EU based distribution hubs. We are watching this space with great interest.” Optimizon published guidance on how business owners should prepare Amazon business for Brexit. Ben Williams, who runs Out-Reach Pro, a UK digital marketing agency, was less optimistic. “There’s no denying the importance of FBA as a service. However, businesses will only make the most of FBA if their Amazon sales are already fully optimized. Setting up FBA and achieving optimal sales through Amazon can be complex. Many companies still find succeeding on Amazon a real challenge and will be seeking specialist help.”

At present, it appears that UK retailers have limited options to keep selling into the European market: Whilst the new Brexit rules will be a headache for thousands of UK businesses, it appears that Amazon is set to benefit. It’s probably not what Brexiteers had in mind when they pledged to ‘take back control’. But, whether it pleases you or not, in the short term at least, Amazon will be critical for thousands of businesses to continue trading.