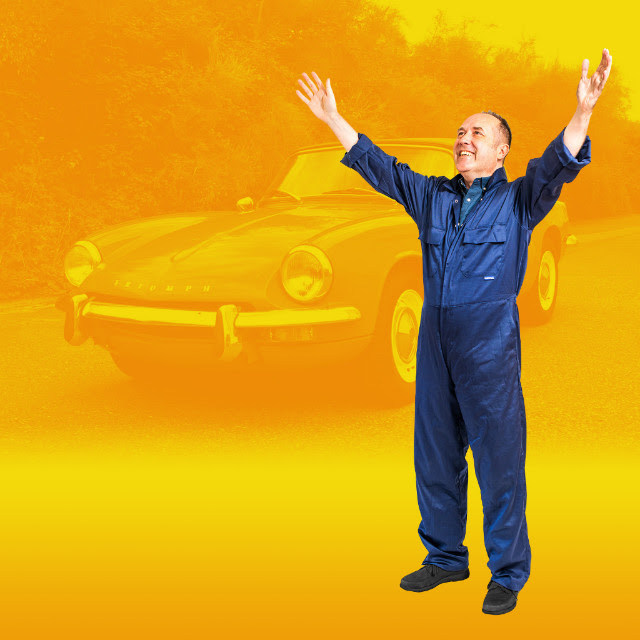 Things I Say When I Don’t Say I Love You is ‘Developed With The Lowry’ and premieres on the Salford stage Thu 1 & Fri 2 Feb 2017.

The solo performance by award-winning Warrington based Sam Brady is a warm, funny and uplifting story about Ian, whose Father Tommy is living with Alzheimer’s. Ian and his son agree to fulfil Tommy’s life’s dream to restore a vintage car. But amid stripped engines, rusted metal and frayed tempers, the three men discover that piecing together the past can have unexpected consequences.

As a failed Buddhist monk turned comedian and performer, the theme that runs through Sam Brady’s work is trying to live a life of kindness in an unkind world. Although funny and uplifting, Things I Say When I Don’t Say I Love You is a sensitive portrayal of three men trying to communicate their feelings for each other as their world is turned upside down..

Sam Brady said, “Last year my parents were involved in a serious car accident on the M62. They both survived but it changed things. Suddenly they seemed older and more fragile and I realised that roles were reversed – it was now myjob to look out for them. Meanwhile, my daughter was starting out on her own adult life – my little girl had gone and here was this young woman telling me to stop interfering.

“I suddenly felt very confused about my role. It seemed like all the rules had changed and I was stuck in the middle. So I did what any sensible person would do in this situation and wrote a play about it. I wanted to write about how families react to the changing stages of life. I focused on the father, grandfather and son because I think that we men often struggle to articulate our emotions and there’s a lot of pathos and humour in that struggle. I’ve tried to do justice to all three generations – each has their own way of dealing with things.”

Claire Symonds, Senior Producer for Artist Development at The Lowry said, “So many families in Salford and beyond will have experience of Alzheimer’s and the way it changes family dynamics. The particular kind of tough Northern tenderness between the men in Sam’s play is poignant, warm and true to life. We are very proud to have supported Sam to bring this piece of new writing to audiences.”

Festival of Manchester – countdown now on

We are Willow Berlin at Whitworth Gallery

Deliveroo to hand out hundreds of FREE BURGERS in Manchester tomorrow