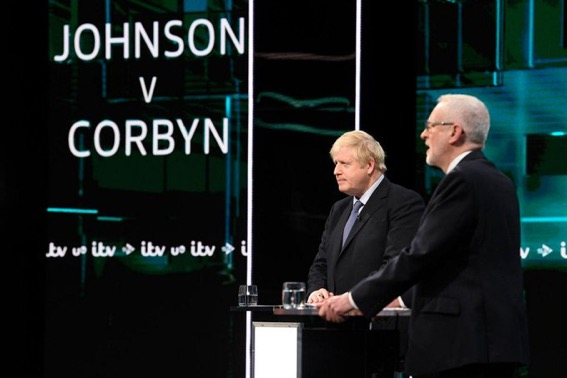 Corbyn starts by attacking the rich. Johnson starts by promising to get brexit done (twice). I think we can go home now.

Yes Salford was the venue for the first ever head to head leaders debate as ITV hosted Boris Johnson and Jeremy Corbyn head to head with just over three weeks until voting day.

What then did we learn from this episode?

Well the all important YouGov snap poll, called the debate too close to call. Some will argue that is a win Corbyn given that he is so far behind in the polls but a game changer?

Not so In terms of Brexit, Boris Johnson appeared to blame all the country’s woes in its failure to deliver Brexit, while Jeremy Corbyn refused to answer when he would campaign in his promised referendum to remain.

Was the Union more important than Brexit?

Corbyn ducks it, Johnson says “The union is the most important thing” but fails to give any clarification on Northern Ireland.

Both seem to believe that putting more money into the NHS will help to solve its problems and both would not trust the other in running it.

After that the debate seemed to descend into light entertainment

A “quick fire” question on climate change followed by what book would you leave for each other under the Christmas Tree.

“A debate to match this tawdry election.” one commentator described it as.

During the debate, The Tories came under fire for rebranding their twitter feed as fact check UK.Twitter has accused the Party of misleading the public and warned of consequences if they deem to do it again.

So on we go, Johnson will use delivering Brexit as his campaign thrust, Corbyn will concentrate on the NHS, and on we go.

Labour launches a manifesto for every region of England