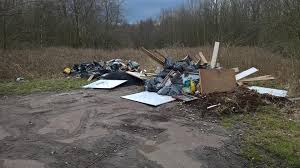 Wigan has bucked the national fly-tip upsurge with nearly 1,000 fewer incidents reported in 2018/19 compared to the same period five years ago.

According to statistics published by the Department for Environment, Food and Rural Affairs (Defra), the number of reported incidents of fly-tipping in 2018/19 stood at 1696, down from 2582 in 2014/15.

Despite being the second largest authority in Greater Manchester, the numbers put Wigan as the third best in the city region for the amount of recorded incidents and one of the only authorities to show a reduction.

Across England, there were almost 1.1 million fly-tipping incidents last year – an increase of 8 per cent from the previous year.

Paul Barton, Wigan Council’s director for environment, said: “It’s really encouraging to see our zero-tolerance approach to fly-tipping is proving fruitful. It’s a result of the investments made in staffing and technology and all the hard work that the boots on the ground have put in who take a massive amount of pride in their work.

“We have been working hard to raise awareness of the broad range of materials that can be recycled and reminding residents of the simple steps they can take such as checking licences and using reputable waste removal companies through our Good Trader Scheme.

“The decrease in the amount of recorded incidents is also helped by residents who provide us with intelligence for more prosecutions.”

Investment and a re-configuration of the council’s enforcement team has been vital in the five-year journey with 12 officers working around the clock seven days a week chasing up any reports of illegal waste practices.

Before any enforcement, officers will always look to educate first and offer support on how they can help residents get back on their feet and start with a clean slate.

This was demonstrated in 2018 when the council’s community clean-up and waste amnesty in Leigh was nominated for Best Community Initiative.

Building community trust and a cohort of neighbourhood groups that are willing to pick up some of the extra strain when it comes to tackling fly-tipping proved pivotal.

But for those who choose to repeat their mistakes and willingly flout the law, a different approach is taken through fixed penalty notices or the courts.

There have been a number of cases in recent months where people have been prosecuted for not getting rid of their waste properly.

Earlier this year, a resident was prosecuted after environmental officers unearthed one of the largest fly tips made up of domestic waste.

Mr Barton added: “We are determined to do everything we can to catch and prosecute those people who think it is acceptable to fly-tip their waste whether that is by issuing fixed penalty notices or through the courts.

“Recent prosecutions should provide people with a clear warning on the consequences for breaking the law and disposing of their rubbish irresponsibly.

“Tackling fly-tipping in the borough is a priority for the council as not only does it result in unnecessary clearing costs but it is a blot on our beautiful green spaces and communities.

“As part of The Deal it is vital that residents support us with this issue and we encourage anybody who witnesses it to contact us with as much information as possible such as vehicle registration, date and time so we can identify perpetrators and take legal action.”

The crackdown on fly-tippers who look to make money on the back of illegal waste removal has also proved significant by the recent statistics.

Every year Wigan Council spends approximately £850,000 cleaning up fly-tips and has therefore looked to reinvest where possible in the fight against illegal waste.

Most notably, £120,000 has been spent on physical obstacles at notorious hotspots that prevent offenders from accessing sites easily along with another £40,000 on technological equipment in the form of covert CCTV and body cameras for enforcement staff.

Council bosses will also be looking at how best to use drones in the fight against fly-tipping over the next 12 months.