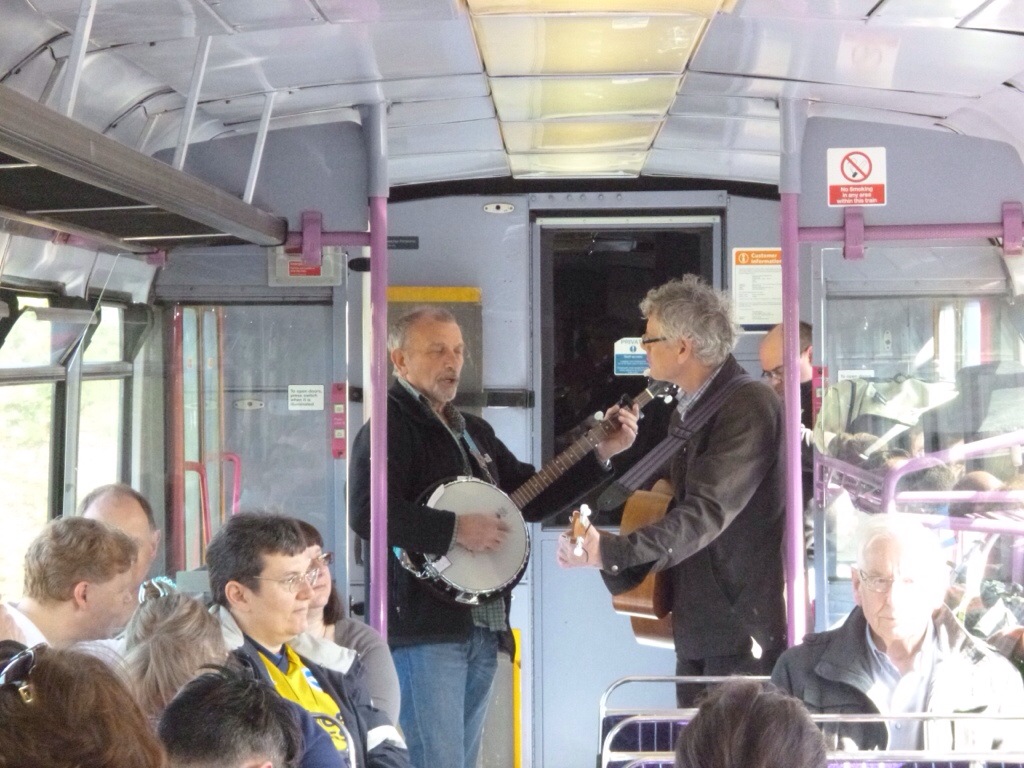 Its Good Friday at Stockport station railway station, blue skies for a Bank Holiday, a pop up dance band on Platform Two are performing tunes from around the world, Philippine music slips effortessly into Indian Bangla and American Rock, whilst Virgin Pendolino trains glide through the station in their distinctive red livery tracking between Manchester and London

Meanwhile tucked away on platform 3a is the 10.10 to Stalybridge, twenty five minutes connecting the town to the gateway of Saddleworth Moors.

A few people are taking pictures, and as the conductor opens the doors, people rush excitedly board with a sense of anticipation as the train prepares to depart.

“This is the Northern Rail service for Stalybridge calling at Reddish South, Denton, Guide Bridge and Stalybridge”

“Sit tight” says the guard, “it will all be over by 10.35” as a group of rail enthusiasts start plotting with their maps their onward journey peering at maps and timetables and whether there is a return service once they reach Huddersfield.

This, of course, is no ordinary train. Dubbed the Ghost Train by the media last year, one of the least used lines in the country, the service runs just once a week.

We leave two minutes late, the result of waiting for a Virgin train to clear the station and cross the Mersey along the imposing Stockport Viaduct, twenty seven arches of Grade II listed red bricked Victorian engineering first opened in 1840 only to be held up again by a red light for more trains to clear as we cross onto the branch line.

Somebody tells me this section used to be four tracks, now it’s a single track suitable for a single train.

At 10.20 we are welcomed by a crowded platform at Reddish South Station and quickly the two carriages of the train are quickly filled.These are the Friends of Reddish South who are campaigning of regular rail services to Manchester’s Victoria Station station.However today is less about campaigning as musicians Ged and Phil climb aboard and begin playing.

“have we have any steam enthusiasts here” asks someone to the captive audience as we pull away selling DVD’s of the Flying Scotsman whilst Retrorailtours hand out leaflets advertising a special excursion in the summer to Edinburgh, picking up from Reddish South.

It’s 10.25 as we pull into Denton, a few more people are waiting to board while the band sings “rolling my sweet baby on ’til the mail train comes back”

The train comes to a halt and the driver leaves his cab and dons his fluorescent jacket, the signal is stuck on red, the shock perhaps of a full train on the line. We continue on past the reservoirs at Audenshaw, as the musicians continue ” Son of a gun we’ll have big fun on the bayou as one rather bemused passenger gets off at Guide Bridge.We are on the main line now as we pass Ashton under Lyne heading for our final destination Stalybridge, eight minutes late but nobody is going to care and Mini Easter Eggs are handed out.

The group move to the famous station bar, one of the very few remaining Victoria railway bars, one hundred and fifty years old and famed for miles around on the ale trail line. It’s bacon butties, tea and coffee rather than the array of real ales on display as Ged and Phil set up in the back room.

The Friends of Reddish South are campaigning hard to get this route opened up again for regular services by Transport for Greater Manchester with the backing of their local MP and local council.They have also completed a makeover of their station.

Kim Burrows, acting Secretary tells me that they see a regular service from Reddish and Denton as the missing link in the creation of the Northern Hub so called ‘jigsaw’ completing the East Manchester link and making journeys into Manchester much easier from this part of the conurbation.

As the breakfasts are finished, the members prepare to head back home.They can’t go directly of course, this train is one way only and has already made its way back to the sheds at Newton Heath.The dilemma is whether to go back to Piccadilly or Victoria.Meanwhile the band plays on and the bar is doing a roaring trade.

Designers for 22 May attack memorial selected