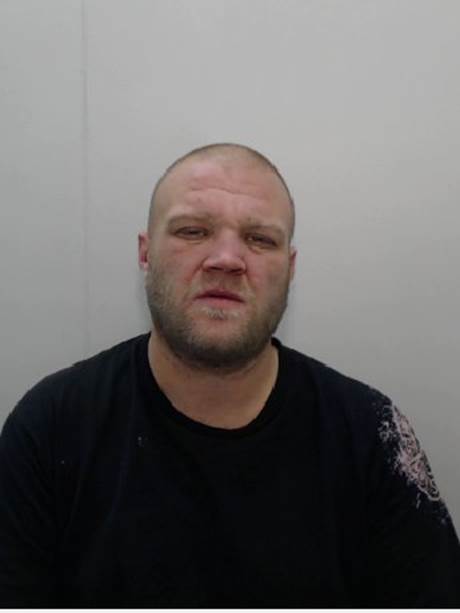 Oldham-based Sarah Crone was driving her silver Nissan Juke into an industrial estate in Moston back in October 2017 when her vehicle was clipped by the rear end of a low loader.

The owner of a local garage – a man in his 30s – noticed the vehicle as being part of his fleet and went out to speak to Crone.

On doing so, he was met with a barrage of racial abuse before being threatened Crone’s nephew would come to the garage and ‘sort him out’.

A short time later, 40-year-old John Thornley turned up in his blue Audi Q7, getting out of the luxury SUV, yielding a pickaxe.

Without any warning, Thornley struck the man in his 30s with the weapon, luckily only grazing his neck but he bore the main brunt of the blow on his collarbone.

When the victim went to call the police, Thornley tried pleading with him as he fled the scene.

Crone told responding officers that she had been attacked by someone at the garage and therefore asked Thornley to come to her rescue and when questioned why he didn’t stay at the scene, Crone told them Thornley was on the school run.

Despite pleading her ignorance, CCTV shown to the jury at Manchester Crown Court, Crown Square influenced their decision to find her guilty of assault and racially aggravated public order. Thornley previously pleaded guilty to the assault.

Today, they have both been jailed for more than a year.

Detective Constable Terry Macmillan of GMP’s City of Manchester Division, said: “While the violence of this incident escalated dramatically and all from a minor collision, the CCTV shows the injuries could have been much more serious.

“We cannot underestimate the severity of this situation and thankfully he escaped with minor injuries but had he not reacted as quickly, we could have been looking at devastating consequences.
“Crone exercised her right to a trial and I’m pleased to say that the victim remained strong and resolute in his commitment to see justice done.

“Today’s sentence sends a strong message that violence is never and will never be tolerated. The consequences of our actions in the heat of the moment can last a lifetime.”