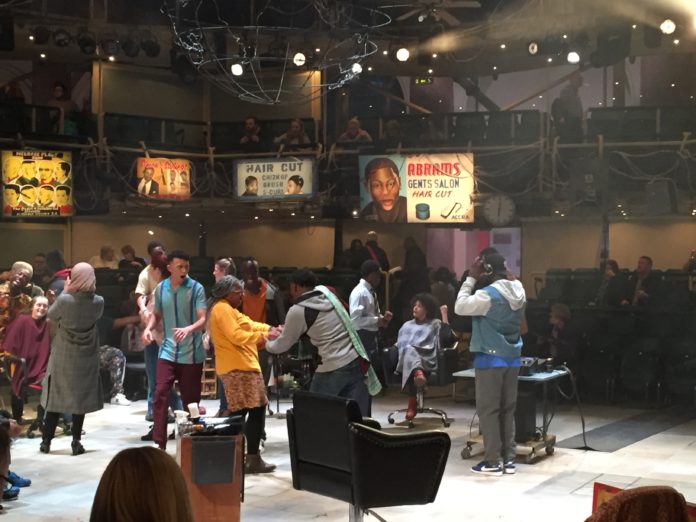 All human life is here …. or rather maybe the voice of all African men is here…. ??

Five are in areas of Africa; Accra, Harare, Johannesburg, Kampala and Lagos and the sixth one in London.  All places where African men can go for the purpose of a haircut or shave but are able to revel in the eclectic discussions the barbers and customers have on everything, from whether Nelson Mandela ‘sold out’, through racism, football and abuse, to the pros and cons of dating a white or black girl.

Whilst all of these subjects could be considered inflammatory this is a brilliant comedy with loads of giggle room at the well observed dialogue, albeit there are plenty of real stop and think moments.

The barber shops come alive with opinions and the unwritten agreement that everyone is allowed their say …..unless maybe they are too young to know … but out of the mouths of the young men in this production are the still strong black men of the future.

Each of the barber shops appear to fulfil a very real need for men to communicate in a safe and non-judgemental environment, bearing in mind how mental illness has been and still is a ‘no-go’ area and how hard it has been historically in the UK for black men to access counselling or psychotherapy along with their fear of being labelled dangerous added to the very real threat of being two or three times more likely to be sectioned, it’s understandable how sitting alongside someone culturally in the ‘same boat’ as you in a non threatening environment would be comforting, cathartic even.

Certainly for those who left their homes in Africa to come to the UK it is an ideal place to talk ‘the old days’ and the age old discussions about the youth of the day never having had it so good.

I was going to reference here the stand out performances by Emmanuel Ighodaro, Mohammed Mansaray and Demmy Ladipo but as I turned the pages of my programme I was struck by how many more names I could have mentioned as this is a talented cast, brilliantly performed and interspersed with some wonderfully harmonised choral snippets.

Due to the movement of the performers and the stage production The Royal Exchange really is the perfect venue to host this entertaining fast paced slick production, so make sure you take your seat early and be invited into the barber shop for a consultation and ‘hair cut’ or sit a while and soak up the fun filled welcoming environment.