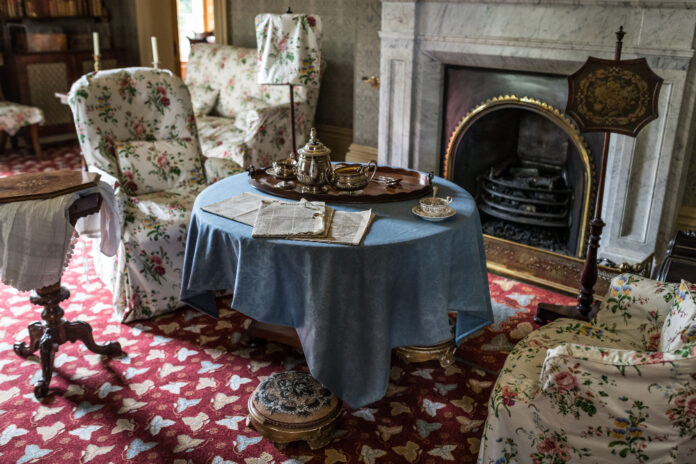 Visitors to Elizabeth Gaskell’s House will not only find the Grade II* listed Regency-style villa to explore when it reopens on Wednesday 19 May, but also a brand new exhibition; A Love Affair with Cranford (until 30 April 2022).

The exhibition gives the opportunity to discover the many different dynamics of one of Elizabeth Gaskell’s most popular novels, which will be accompanied by a family trail through the house.

Whether your first experience of Cranford was reading the book or watching the BBC series, or you have yet to enter the world of Matty and Deborah Jenkyns, Mary Smith, Octavia Pole and others, you’ll be fascinated by a tale to which there is more than meets the eye.  Since it was published in 1851 Cranford has never been out of print, having gained the greatest national and international appeal of all Gaskell’s works.  It is also believed to have been the author’s favourite novel, as “the only one of my own books that I can read again” and the title being the name she affectionately went on to give to her cat.

The story behind the chocolate box façade of Cranford is where its appeal for many stems, with the social constraints faced by Victorian women turned on their head.  What began as a serialisation in Charles Dicken’s Household Words was destined to become a novel because of the instant high regard it attracted.  And its continuing popularity means that it has been translated, illustrated and transported from the page to the stage; all of which are elements that will feature in the exhibition, which also includes some rare editions.

Amongst the objects on display will be one of the costumes that Dame Judi Dench wore in the acclaimed BBC production, in which she played Miss Matty Jenkyns.  Dame Judi Dench is a patron of Elizabeth Gaskell’s House, and ahead of playing the role in 2007 she spoke fondly of reading Cranford as a schoolgirl in Yorkshire from a book with a raised oval portrait of Gaskell.  “I remember that so terribly well, and I’ve loved coming back to the novel again”, she said at the time.

For younger visitors, and in a nod to Elizabeth’s cat Cranford, there is a series of toy cats to spot as they make their way around the house and an accompanying activity sheet to enjoy.  Each feline friend in the Cranford Trail is adorned by an outfit made by the volunteers, who have all had fun creating their literary inspired ensembles.

Sally Jastrzebski, House Manager of Elizabeth Gaskell’s House, says, “Elizabeth Gaskell’s work has remained popular because she took readers into Victorian society in a way unlike any other writer. In Cranford she challenged conventions by focusing on a group of self-reliant unmarried middle-class women at a time when literature tended to centre upon marriage.  The themes of the book, the way it been responded to over time, the fashions of the period, the role of illustration and the influences that Elizabeth drew on from her own life; these are all aspects creatively examined within the exhibition.”

Part of the fascination of visiting A Love Affair with Cranford in Elizabeth Gaskell’s former home is that you are placed in the very setting of a writer who had both a busy working and family life.

Having moved into the house just the year before Cranford’s publication, when the youngest of her four children was only three years old, it’s a period of time that saw more of her work published, her husband’s involvement in Owens College and many other Manchester institutions, a trip to London for a portrait sitting with George Richmond and visits to the house from Charlotte Bronte, Charles Dickens and other celebrities.  All of these real life experiences of Elizabeth’s life in Victorian England are woven into the visitor journey that the House guides help to vividly illuminate.

Elizabeth Gaskell’s House will reopen from Wednesday 19 May 2021 and will then be open every Wednesday, Thursday and Sunday from 11:00am to 4:30pm.  This will also be the first time that visitors are able to see Elizabeth’s bedroom, with the new project completed in time for the reopening of the House.  Entry is £5.50 for adults and £4.50 for concessions (senior citizens and students).  Tickets can be pre-booked up to two weeks in advance via www.ticketsource.co.uk/elizabeth-gaskell-house.