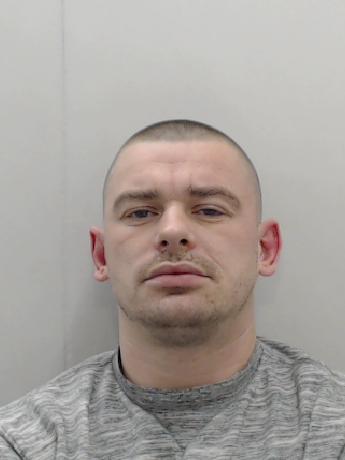 Five men who went on a crime spree across North Manchester for four months last year have been jailed.

Manchester Crown Court was told that between between August and November 2016, the five men from an organised crime group committed a number of aggravated burglaries and robberies, were found in possession of a variety of drugs, carried offensive weapons and blackmailed people to benefit from the proceeds of crime.

The group carried out a series of violent raids at shops where they were armed with weapons including a sledgehammer, which Williams had brandished at a Co-Op before threatening staff.

Although consistent in their approach to the robberies – screaming and swearing at staff members and demanding money with their faces covered,their getaway vehicles ranged from stolen motorbikes to vans and a Ford KA with Brogan’s fingerprints on the door, proving him as the driver.

In a police operation to put a stop to the prolific offending, officers searched vehicles and houses connected to the group, which resulted in the following being seized:

Diamorphine worth more than £1500, some of which was concealed in a popular children’s toy included knife and a hammer

Stolen goods including a laptop from an aggravated burglary in Moston, £290 worth of crack cocaine concealed in 29 individual wraps and seven mobile phones

Analysis of mobile phones revealed enquiries were made to purchase various items and weapons including CS gas, a machine gun and 2000 rounds of ammunition.

Examination of the phones also revealed messages linked to drug use including one sent from Tallon which said “bring me a sniff” – referring to cocaine.

During the offending period, a report of blackmail had been made to police with a message sent from the group to a woman in West Yorkshire stating “Tonight, your gaff, going to cut your face, you have [until] 9pm tonight to get the money.”

Her car had been stolen by the group and, once she had agreed to pay the blackmail fee, Kelly, Peacock and the others met her in Cheetham Hill to return a car key to her.

This was in fact a key for another vehicle they had stolen from a handbag and the group fled once again to continue their tirade of felonies.

Detective Sergeant Ian Haselden of GMP’s City of Manchester Team, said: “During the peak of their offending, these five men were a considerable threat to the North Manchester area, posing a risk to the safety of innocent people and businesses.

“It is our duty to protect people and bring those who are a threat to others to justice.

“Although we may never understand how these men could so callously continue breaking the law and putting people in harm’s way, my team and I have been able to gain a deep understanding of their processes and how they operated, resulting in today’s outcome.

“We will continue to take severe measures to restrict those who think they are above the law and do everything in our power to show them that they are not.”

Gang who conspired to flood Manchester with cocaine are jailed