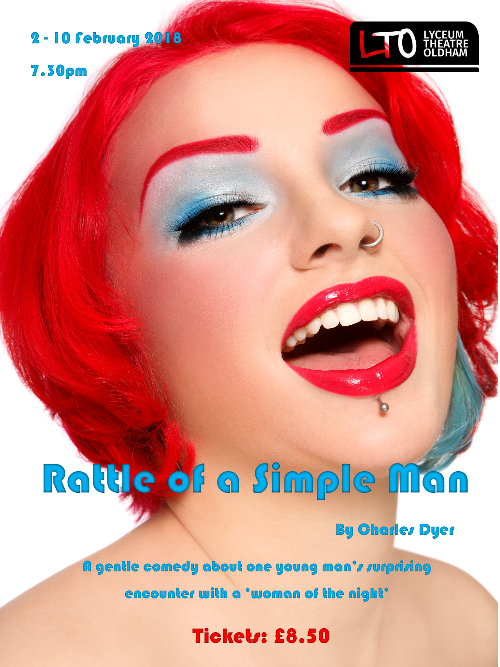 Set in a bedsit in London, Charles Dyer’s 1960s unconventional love story introduces Northern lad Percy to the delights of lady of the night Cyrenne, when they find
themselves spending the night together.

Naïve Percy has come down for the Cup Final and has no idea how to handle such a close, personal situation.

However, the night doesn’t turn out as you might expect and, as their time together draws to a close, it turns out they have a lot more in common than they could have imagined and their lives could change forever if they dare to dream.

Writer and actor Charles Dyer’s work has been said to “describe people in the shadows discovering sunshine in each other.”

Rattle of a Simple Man, which runs at Lyceum Theatre Oldham from 2-10 February, does this and more through this little performed gem of a play.

The play is directed by Pauline Walsh, one of the two Artistic Directors at Lyceum Theatre Oldham.

Pauline is enthusiastic about the Season of British Comedy and of this play in particular: This season is full of light and shade. We said at the outset that everyone loves a comedy and there are a whole range of comedies, making this as diverse a season as any other, from farce to break your heart ones.

Tickets are still available for Rattle of a Simple Man and can be bought online for only £8.50 from lyceumtheatre.org.uk.