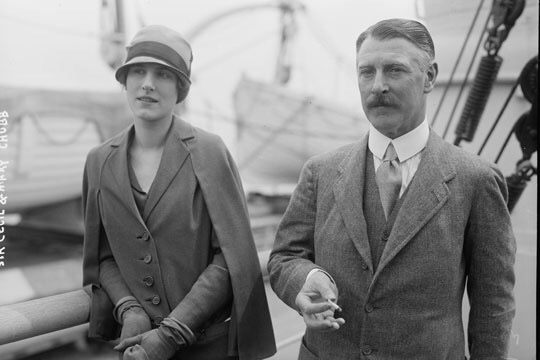 One hundred years ago today, Stonehenge, probably the most famous prehistoric monument in the world, was sold at auction for £6,600
The buyer was a local Wiltshire man, Cecil Chubb. His purchase marked a turning point in the care and protection of the ancient monument and English Heritage, today’s guardian of Stonehenge, is marking the anniversary with re-enactments of the momentous auction throughout the day and with a special commemorative ticket for visitors.

Kate Mavor, English Heritage’s Chief Executive, said: “Cecil Chubb’s impulse buy marked a turning point in the story of how Stonehenge was transformed from neglected ruin to national treasure. His winning bid set in train a programme of care and conservation for both the monument and the surrounding landscape, one that continues today and whose next major milestone will be the removal of the A303 from the Stonehenge landscape.”
Legend has it that barrister Cecil Chubb went along to the auction in Salisbury to buy a set of dining chairs (as instructed by his wife). Instead he walked out of the Palace Theatre £6,600 lighter and the owner of Lot 15: “Stonehenge with about 30 acres, 2 rods, 37 perches of adjoining downland.” Chubb remarked to a local reporter that he had not intended to acquire the ancient stones “but while I was in the room, I thought a Salisbury man ought to buy it, and that is how it was done.” Asked if he had any plans for the stones, Chubb replied that he had not yet had time to think about it but wanted to assure the public that every means of “protecting Stonehenge…would be taken.”
Prior to its purchase, Stonehenge was in a perilous condition. A popular attraction since the Middle Ages, by the 19th century people were regularly chipping the stones for souvenirs and scratching their names on the monument.

In 1881, timber props were used to shore up stones considered to be in danger of collapse while in December 1900, an upright sarsen stone fell and the massive horizontal lintel it held in place snapped in two.

There was an outcry following which a police constable was appointed, the first organised excavation of Stonehenge got underway, the monument was enclosed by a fence, and an admission charge was introduced towards the upkeep and care of the monument. But the stones remained in a worrying condition with many of them held up with wooden props.
Stonehenge had been owned by the Antrobus family since the early 1800s but when the heir to the Antrobus baronetcy was killed in the opening months of the First World War, the estate was divided into lots and put up for sale via auction. And so at 2pm on 21 September 1915, the Palace Theatre in Salisbury was “filled with an interested audience, intending purchasers and spectators” and in the hands of Messrs Knight, Franck and Rutley, Stonehenge went under the hammer.

“Surely someone will bid me £5,000 to start with,” urged the auctioneer, Sir Howard Frank. A hand in the stalls was held up, and in calm, business-like tones it was announced that the first £5,000 bid had been received. Bidding increased by £100 increments from £6,000 until the figure of £6,500 was reached by local man Isaac Crook, whose grandson Richard still farms the fields around Stonehenge today. One more bid was received, “the hammer remained aloft for an instant; there was no further offer and it descended with a sharp rap.” Stonehenge was sold for £6,600 to Cecil Chubb.

Three years later in 1918, Cecil Chubb donated it to the nation, writing, “I became the owner of it with a deep sense of pleasure… [but] it has been pressed upon me that the nation would like to have it for its own…”. A special handing-over ceremony took place in October 1918 and Chubb received a knighthood, gaining the local nickname ‘Viscount Stonehenge’.
Thanks to Chubb’s impulse buy and his generosity, Stonehenge had been saved future generations. English Heritage’s predecessors, The Office of Works, began to care for the monument, restoring many of the fallen stones and undertaking a major survey and programme of excavation. Later, a national appeal was made to restore and preserve the surroundings of Stonehenge to its former natural state.

The then Prime Minister, Stanley Baldwin, lent support, George V contributed 20 guineas and the Druids provided 10 guineas. In 1929, 1,500 acres of the surrounding downland were purchased by the Government and vested in the National Trust. In 1986, Stonehenge, the Avebury henge and stone circles, and over 700 other prehistoric monuments in the surrounding area were inscribed in the World Heritage Site List.

The restoration of the Stonehenge landscape continues. In December 2013, English Heritage opened a new visitor centre, 1.5 miles out of sight of the stones, and started to restore the landscape immediately to the north of the stones, removing the unsightly, old visitor centre, grassing over the now closed A344, and re-uniting the ancient processional approach – the Avenue – with the stones. In December 2014, the Government announced that it will be investing in a new tunnel of a least 2.9km to remove the A303 from the Stonehenge landscape, an announcement that English Heritage, Historic England and the National Trust have all welcomed.