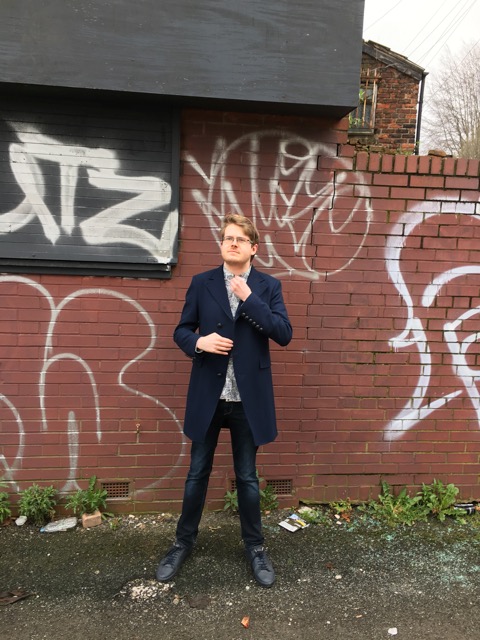 It’s a decade since the Conservative Party had a councillor on Manchester’s Council, even then it was a bit of a misdemeanour,34-year-old legal executive,Faraz Bhatti defecting to the party after being elected as a Liberal Democrat in Whalley Range.

Manchester has been lacking any blue members ever since and you would have to go back to the 1970’s.

In recent years the party has more or less forgotten about Manchester, rarely are its candidates seen on the hustings, only a token representation on the ballot paper.

One man though is sticking his head above the parapet in 2018 when all ninety six seats are up for grabs.Writer and producer Tim Dawson, who has made his living mainly working in comedy, but who has recently written some drama, a Doctor Who spin-off drama, he tells us.

Being a Tory in Manchester is not an easy thing, just ask the Lib Democrats, what happened to them on the council as the coalition local authority cuts descended on the City after 2010.

Tim is adamant though that it was not one sided:

“There was a broad consensus in 2010 that we were overspending and that we needed to get our finances under control. This was acknowledged by plenty of labour politicians – including Alistair Darling and, more infamously, Liam Byrne in his outgoing note as Chief Secretary.” adding,

Tim in standing in Hulme, once a Parliamentary constituency that elected a Conservative so how can the party make that link again?

“The simple answer”, he says,” is we stopped going there and we need to start again. I think this new very left-wing, very middle class “Marx and avocado” Labour party has given us the perfect opportunity. Labour has moved so far from its traditional voter base – from what they instinctively think and believe – that they’ve become unrecognisable.”

He recalls speaking to man in Hulme, on the Stretford Road:”They don’t like Corbyn. They know it’s all a fantasy. They already, actually, share a lot of views with conservatives – so if we can get in there with practical, practicable politics that aren’t based in rhetoric but action, I think we have a real chance to reconnect with those voters.”

Another re connection, Tim believes is that elected councillors in the ward are not doing their jobs:

“Residents say they only actually hear from Labour at election time. One of the previous councillors in Hulme was barred from standing again because they didn’t turn up for any key council meetings for nearly 6 months. That’s just unacceptable, and selling the area short. If elected, I intend to make myself regularly available to deal with local concerns – simple things, like helping fill out forms or get action from the council – I take that community-centric local side of the role very seriously.”

The current council comes in for a lot of criticism,”there is something very Blairite about this council,polished, great PR, but little respect for the actual electorate.”

Labour controls 95 of the 96 seats up for election, so the first step is meaningful opposition for Tim.

“Beginning to elect opposition councillors will have an effect, because it will make the
current council more accountable. Their decisions can be properly scrutinised, rather than
made in a bubble within what is effectively a one party state. So getting some decent
opposition is stage one.”

As for policies, the big issue in the city is affordable housing, where the council seems to be going out of its way not to deliver.

If I’m elected, I would most certainly be voting for measures to tackle that. Homelessness is another problem – so why not spend some of the money which is being wasted on that?”

While he adds that one of the big issues is money being blown in the city centre and not
allocated properly to areas like Hulme.

“I will be calling that out. I hope residents will see that a representative answerable to them rather than the council leadership will put them in a better position: I will be able to speak out, make a fuss and call out bad decisions in a way the other options can’t.”

With Transpennine electrification off the agenda, is HS2 now also under threat?