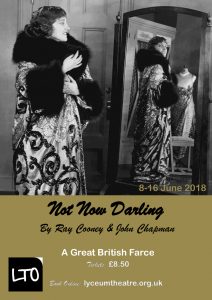 Lyceum Theatre Oldham ends a Season of British Comedy, celebrating the tradition of farce with Not Now, Darling by Ray Cooney and John Chapman (8 – 16 June)

Set in an elegant fur salon in Mayfair, flamboyant owner Gilbert Bodley is scheming to seduce a beautiful (but unfortunately married) stripper, with the aid of a mink coat.

His scheme goes badly awry when her husband buys the coat at a reduced price for his own mistress. Frenzied attempts to retrieve the coat and hide the now naked stripper lead to the kind of elements that make up the Great British Farce.

Ray Cooney and John Chapman are masters of the art and, with the perspective of the 21st Century, we can enjoy the un-PC shenanigans and comic character creations in a new light.

Not Now, Darling was written in 1967 and opened on the West End on 12 June 1968. This production (the run includes 12 June 2018) celebrates farce’s enduring power to make us laugh.

The play is directed by David Fielding, who has been part of the Lyceum (on and off) for over thirty years. David told us: “I was thrilled to be invited to direct this play. It used to be a tradition at the Lyceum to end the season with a farce and I have a fantastic team who are all used to working on farce, which is completely different to any other form of drama.”

Tickets are still available for Not Now, Darling and can be bought online for only £8.50 from lyceumtheatre.org.uk.

Tickets on sale for National Theatre production Follies on the big screen at...