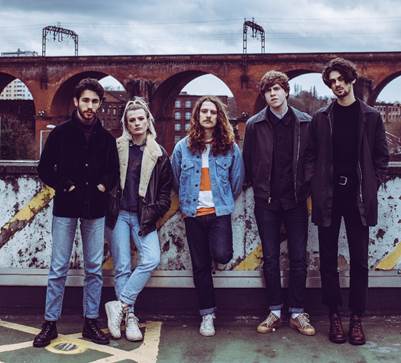 Rising indie Stockport five-piece Fuzzy Sun have announced their debut headline tour of the UK, starting their first of 8 dates in Sheffield on the 14th May and concluding the tour in Bristol on the 24th May. Tickets on sale 9am Friday 15th March.

Fuzzy Sun sold out headline shows at Manchester’s Soup Kitchen and YES before embarking on Blossoms’ sold out UK tour as the main support in December. Since then they have been announced as support for Blossoms’ sold out show at Stockport County’s 15000 capacity Edgeley Park.

2019 is already gearing up to be a phenomenal year for Fuzzy Sun, after being tipped in NME’s Essential News Artists for 2019 and Radio X’s Great X-Pectations list, as well as being named as Manchester Evening News’ Breakthrough Act for 2019. Fuzzy Sun have also recently announced their headline show at Manchester Gorilla on Saturday 23rd February as sold out and are set to play BBC Introducing night with Calva Louise and FEET at the London Lexington on Thursday 7th March.