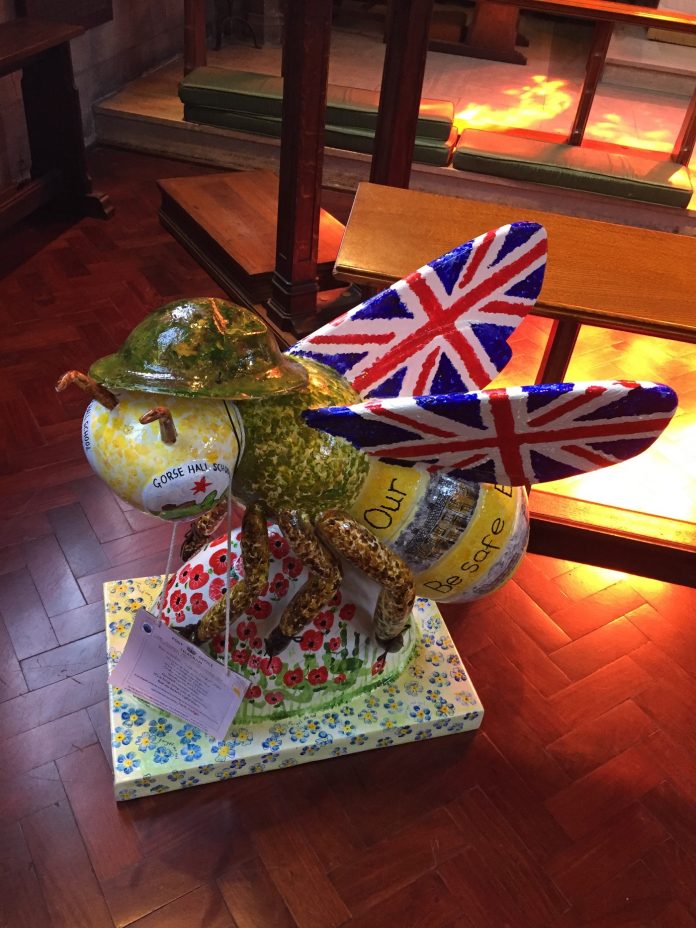 Over the summer Manchester Cathedral hosted twenty bees as part of Bee in the City including Bee-member: Lest we forget designed by pupils from Gorse Hall Primary School in Stalybridge.

Their bee was inspired by and a tribute to those who fell in WW1, as well as a celebration of local Stalybridge heroes Jack Judge, L S Lowry and Beatrix Potter. Gorse Hall Primary School held a whole school competition with over 400 entries, and then selected seven overall winners to create the final design.

Bee-member: Lest we forget will be winging its way back to Manchester Cathedral as part of our WWI commemorative events and will be on display from Wednesday 24 October until Monday 19 November.

The Dean of Manchester, The Very Reverend Rogers Govender said:

“We are looking forward to the return of the ‘Lest we forget’ bee designed by pupils from Gorse Hall Primary School. It is wonderful to be able to provide a space for children to display their art whilst honouring those who lost their lives in WWI.

In addition to the art installations on display during November, Manchester Cathedral will take part in a number of events to mark the centenary as part of the Battle’s Over – A Nation’s Tribute on Sunday 11 November. We hope that you will be able to join us as we commemorate 100 years since the end of WWI and pay tribute to the men and women who were wounded and those who sacrificed their lives”.

“Our school has been incredibly proud to be involved in the Bee in the City. The bee itself, as well as being a commemoration to those who fell in WW1, is also a symbol of the creativity of the children at our school”.

The bee will form part of an exhibition commemorating 100 years since the end of WWI, which will include a display on the Royal Mint’s Armistice 2018 £2 Uncirculated Coin, designed by our Cathedral Artist-in-Residence, Stephen Raw (on display from Sunday 4 to Friday 24 November) and Manchester Hill: Remembered, a project by Manchester Histories.