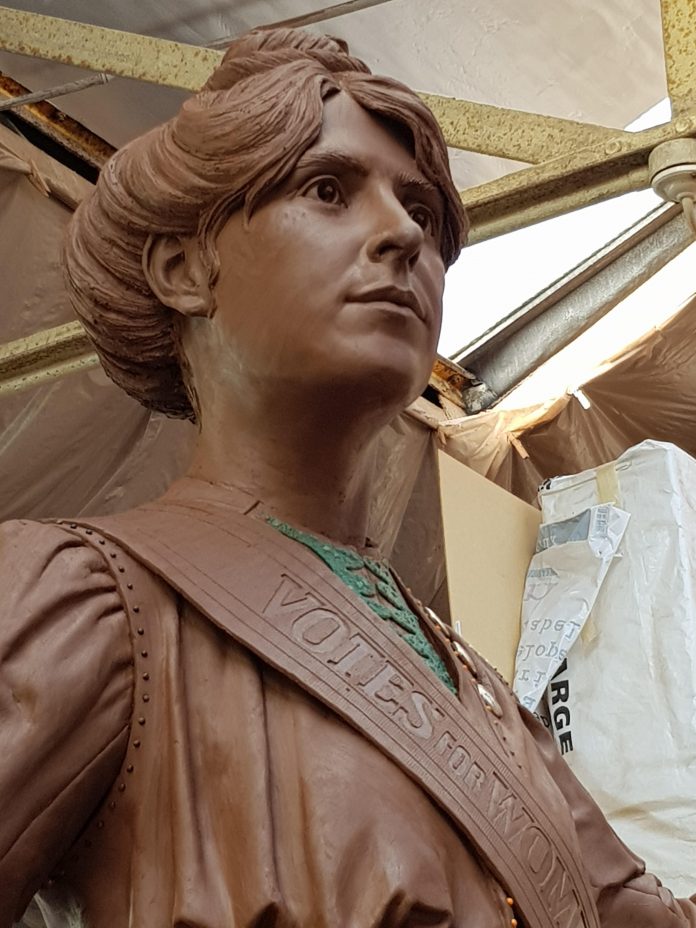 The Annie Kenney Project has taken a huge leap forward this week, with the clay statue formally being handed over to the Foundry.

It’s a first glimpse of the statue, with its amazing detail and quality by the hands of sculptor Denise Dutton.

Fundraising has been underway for two years to secure a statue of Oldham born suffragette Annie Kenney.

As the centenary of the first polling day where women had the vote approaches in December 2018 time is pressing to complete the statue and the projects final fundraising efforts.

The plinth to take a statue was installed during the refurbishment of Parliament Square to grace the steps of the Old Town Hall.

Now £27,000 of the £31,000 needed has been secured. This is in large part thanks to the efforts of local people and the GMB trade union who ‘Kickstarted’ the fundraising campaign, together with over 50 local events in schools, community centres and in the business community.

With around £4,000 left to fundraise, there is still plenty of work to do, including dinners, events and sale of limited edition Stan Chow prints of Annie Kenney.

“Annie was an inspiring women who stepped up to change the world. Without her and others we would not have made progress in reforming our democracy. The statue is more than just an installation but significantly about telling Annie’s story to the next generation.

‘What’s more the statue would have been paid for by public subscription, through the efforts of hundreds of people who feel inspired by her story.

Annie Kenney was born in what is now the borough of Oldham in 1879, to a relatively poor family. She was one of 12 children. She started work in a local cotton mill at the age of 10 and became actively involved in the trade union whilst working there.

Her political activity attracted the attention of the press and the public in 1905 because, during a Liberal rally in Manchester’s Free Trade Hall, she and Christabel Pankhurst interrupted a political meeting to ask Sir Winston Churchill and Sir Edward Grey if they believed women should have the right to vote. Both women were arrested and later imprisoned for allegedly causing an obstruction.

Due to her commitment to the cause Annie was imprisoned a total of 13 times yet when war broke out she travelled the country with other senior members of the WSPU encouraging women and trade unions to support the war work.

Annie died on the 9 July 1953 aged 73 and Oldham Council erected a blue plaque in her honour at Lees Brook Mill, Oldham, where she first started work as a young child.

Local people however feel the plaque is not enough and want to erect a statue in the centre of Oldham to recognise the work she did and the sacrifices she made to secure universal suffrage.

Routine HIV tests to be offered across Greater Manchester