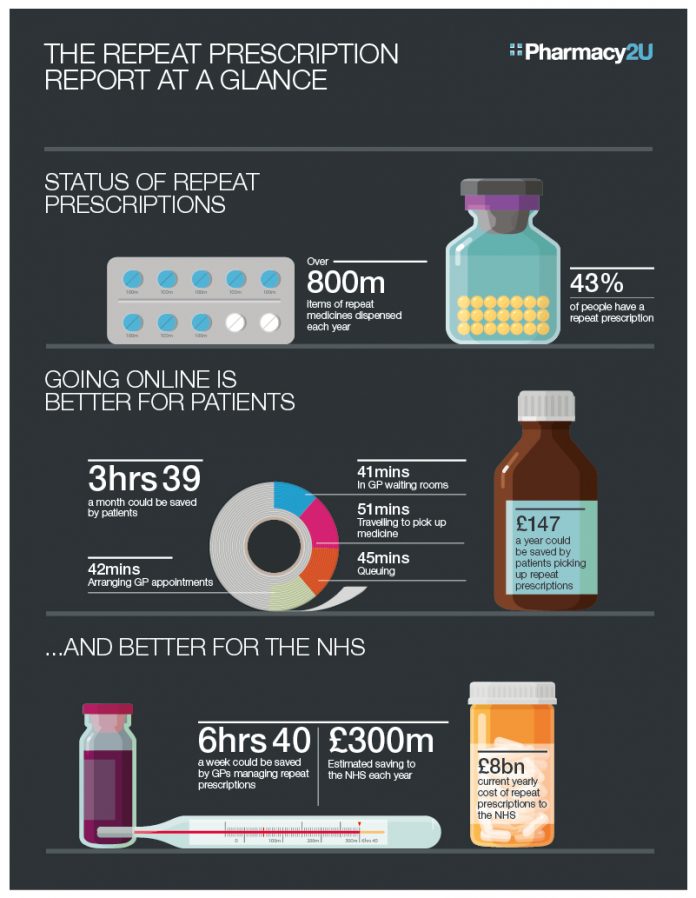 Over reliance on repeat prescriptions is costing the NHS almost £8 BILLION a year – its biggest cost after staff and almost half its total spend on medicine.

A new report produced by the University of Bradford’s Dr Duncan Petty has revealed that almost half of the population are reliant on repeat prescriptions, with 231 million more expected to be dispensed each year by 2039.

Diabetes is the most common and costly repeat prescription for the NHS with over £82 million being spent each year to treat it.

Currently over 800 million items of repeat medicines are currently dispensed each year, but this number is expected to spiral over the next 25 years as a result of an increasingly older population living with more long-term conditions.

It is estimated that by 2025 the number of people living with long-term health conditions will increase by nearly one million putting further strain on the NHS.

The Repeat Prescription Report has been published by Pharmacy2U, the biggest online NHS repeat prescription service in the country and a founding partner of the Electronic Prescription Service.

Financial savings from the Electronic Prescription Service alone over a three-year period are estimated to have been nearly £600 million – saving the NHS £137 million, general practices £328 million, pharmacies £59 million and patients £75 million.

Mark Livingstone, CEO of Pharmacy2U, comments: “The report makes it clear that continued digital transformation is essential in improving patient access to healthcare and helping to relieve the strain on the NHS.

“Technology has transformed industries from retail and entertainment to travel and leisure and it is now making a significant and much needed mark on healthcare.

“We have invested heavily in our technological infrastructure and are on a mission to help modernise healthcare and improve patient outcome in partnership with the NHS by managing repeat prescriptions from request to delivery, which relieves both the time and stress put on GPs, represents better value to the NHS and improves patient medicine adherence.”

Separate analysis by the online pharmacy also found that managing repeat prescriptions online can save the NHS over £300 million in NHS funded annual pharmacy costs.

It revealed the patient benefits of managing their repeat prescriptions online, outlining how patients save an average of 3 hours and 39 minutes a month factoring in time spent arranging appointments, travelling to GPs and pharmacies, sitting in waiting rooms and queuing up.

More than a fifth of people said they have missed a GP appointment or failed to pick up a prescription due to difficulty making opening hours, getting time off work or medical difficulty getting there.

Patients were also found to save an average of £147 a year in transport and associated costs.

Dr Duncan Petty, who authored the report, comments: “Repeat prescriptions are a part of many people’s lives and as the population continues to age, many more will be living with long term conditions that require them.

“Repeat prescriptions currently place a great strain on patients and the NHS, though the NHS is working to improve the efficiency of the prescription ordering process through online ordering and the supply of prescriptions.

“By managing repeat prescriptions online it helps the NHS and makes life easier and more convenient for patients too. NHS staff in general practice and pharmacy will need to support patients with online ordering and continue developing new services to support people on multiple long-term medicines.”