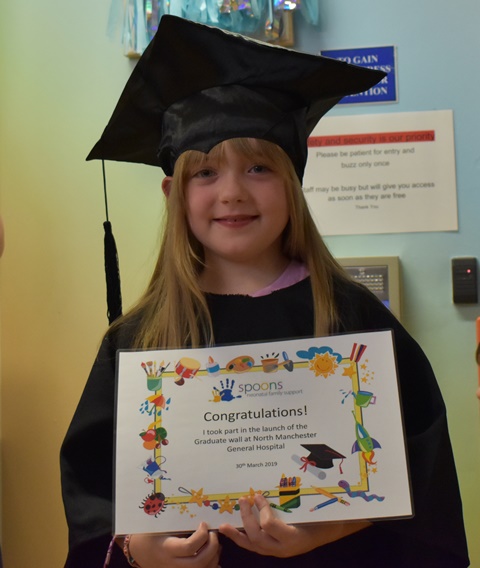 New artwork at the Neonatal Unit of North Manchester General Hospital was unveiled this weekend, celebrated with a graduation themed event for parents and children who have spent time on the unit.

They worked with four local families on the new artwork which covers two walls outside the Neonatal Unit. The walls now have a colourful background and display photos of five children as babies on the unit and as they are today, alongside a quote from each family.

Saturday’s event saw each of the featured five children putting on miniature versions of the familiar black graduation cap and gown to be presented with a certificate which celebrates their successful ‘graduation’ from their time on the neonatal unit.

North Manchester’s Neonatal Unit cares for babies born at 29 weeks onwards. Babies who are born before 29 weeks at the hospital are stabilised on the unit then transferred to specialist units at Royal Oldham Hospital or St Mary’s in Manchester. Once stabilised they come back to North Manchester at the 29-week mark, so that they are closer to parents, making visiting easier for families to manage.

Beth Hurst is mum to four-year-old Joseph whose photos feature in the work. Joseph was born at 31 weeks, weighing just 2lb 11oz when he was cared for on the unit. Beth is a play specialist at the hospital and has volunteered with Spoons on the unit for the last two years.

Beth said: “When you give birth prematurely, you miss the celebration part of having a baby; that’s taken away from you as a mum, and for dads and grandparents too. It’s replaced with a lot of stress and worry, and you can’t do the normal things new parents do; you might have to wait weeks to even cuddle your baby.

“We hope that these bright, cheerful photos on the wall of Joseph and the other children will remind parents going through all that stress that there is hope and a future to look forward to.”