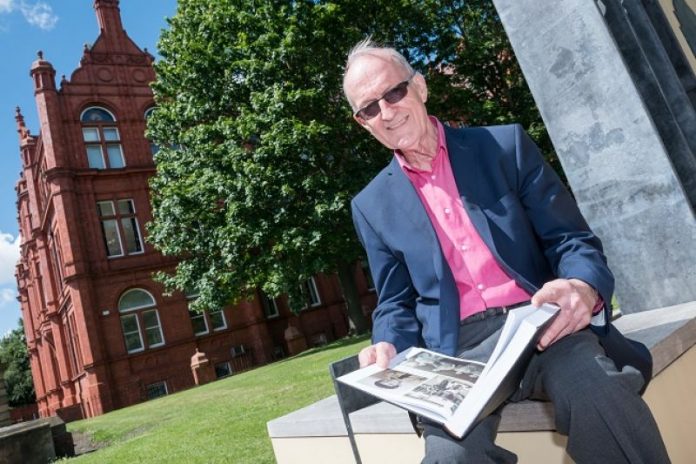 A Wirral Grandfather is preparing to graduate for a fifth time this summer, when he is awarded a degree from the University of Salford.

Robin Thomas, 75, from Spital, Bebington on the Wirral, will graduate with a Master of Philosophy degree from the School of Arts and Media at the University of Salford, bringing the total number of degrees to his name to five.

The pensioner already has degrees in History, Business Management, Communications and Jazz music from other Universities, and has not ruled out doing a sixth degree at the University of Salford.

Robin said: “As an older person, I have found the benefits of keeping my mind active by enrolling for the M Phil. Doing a degree is a challenge whatever age you are, and there are a lot of people my age who don’t see and speak to young people, so they’re out of touch with youth culture, but doing a degree you can share ideas with all kinds of people.”

“I have enjoyed my time here at Salford immensely, and although I don’t have any plans set in stone, I would consider doing another degree here. I have a strong interest in jazz performance and play as much as possible, so my next degree could be related to jazz song writing”.

Robin had a varied career before he retired in 2007. His first job was working in Human Resources within Unilever and other companies, and after fifteen years in industry he taught HR at Warrington Collegiate, formally known as North Cheshire College. Robin later became a communications officer at Bradford Council.

He said: “When I retired, my children were grown up and had moved to live in Hong Kong, so I made the decision to come back to University. I did a Masters degree at a University in Yorkshire, and enjoyed it so much that I approached Salford for a new project.

“For my Salford degree, I produced a multi-media family memoir which combined creative writing, photos and piano jazz tunes that I composed, to fill gaps in my family’s knowledge, especially for my four grandchildren. I now plan to give a copy of the memoir to my grandchildren so they can learn when they are a little older about our family’s history”.

Robin’s lecturer, Dr Ursula Hurley, said: “It was an absolute pleasure to work with Robin, to share his insights and life experiences. Robin is a true ‘Renaissance’ man, with an extraordinary range of skills and interests. We are delighted by Robin’s achievement and the door is always open if he fancies doing one more degree.”

Robin is due to be awarded with his degree in the ceremony for the School of Arts and Media, taking place on Friday 21st July 2017 at the Lowry, watched on by his wife, Lesley and his son, Richard.

30 year old pedestrian dies after being hit by car in Middleton on Xmas...