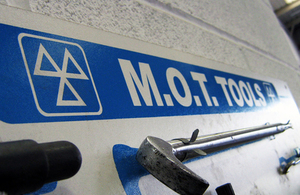 New cars and motorcycles could no longer require an MOT for the first 4 years on the road under plans to save motorists more than £100 million a year.
Proposals unveiled today by Transport Minister Andrew Jones would extend the period before the first MOT test is needed from the current 3 years to 4.
The government is consulting on the plans which will bring England, Scotland and Wales in line with Northern Ireland and many other European countries including France, Ireland, Italy, Spain, Denmark and Norway.
In 1967 the MOT-free period was reduced from 10 to 3 years. Now, safer technology and improved manufacturing means new vehicles stay roadworthy for longer.
Andrew Jones said:
“We have some of the safest roads in the world and MOT tests play an important role in ensuring the standard of vehicles on our roads.
New vehicles are much safer than they were 50 years ago and so it is only right we bring the MOT test up to date to help save motorists money where we can.”
It is a legal requirement that all vehicles are roadworthy, regardless of whether they have passed an MOT test and the content of the tests will not be changed.
More than 2.2 million cars each year have to undergo their first MOT test, which costs owners a maximum of £54.85.
In the last 10 years, the number of 3 or 4-year-old cars involved in accidents where a vehicle defect was a contributory factor has fallen by almost two thirds, from 155 in 2006 to 57 in 2015.
The most common reasons for cars to fail their first tests are faulty lights, according to the Driver and Vehicle Standards Agency (DVSA).
In addition, almost half of faults found during all MOT tests could be avoided by carrying out simple checks and maintenance, including replacing bulbs, checking tyres and oil as well as ensuring windscreen wipers work, and the DVSA is running an ongoing campaign to help motorists ensure their vehicles are safe at all times.
Subject to the public consultation, the changes could come into effect in 2018.

Four new science programmes on the way in 2017

Welcome to the 12 sided £ coin