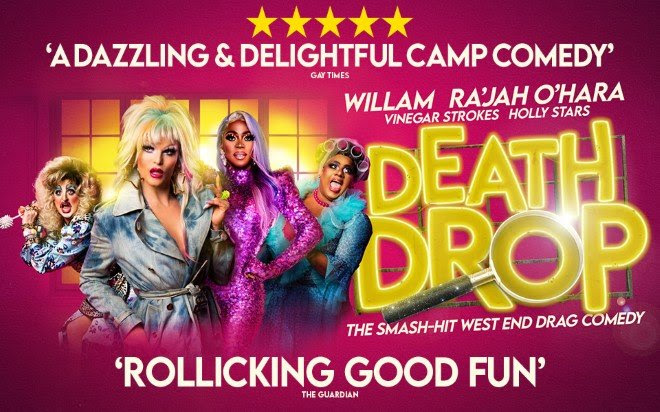 Following rave reviews at London’s Garrick Theatre, the fabulous killer comedy and smash hit sold-out sensation Death Drop will be sashaying across the UK on tour this autumn. Kicking off in October the tour will visit The Lowry from Tuesday 12 – Saturday 16 October 2021. Tickets are on sale now.

Described by Attitude as a “killer show” and ”rollicking good fun” by The Guardian, the UK tour will star Ru-Paul USA drag legends Willam and Ra’Jah O’Hara and Drag Race UK star Vinegar Strokes who reprises her originating West End role, together with Holly Stars and a full cast of leading drag performers.

Written by Holly Stars, this “dazzling and delightfully camp comedy” is “jam-packed with hilarious one lin-ers” and guaranteed to provide laugh-out-loud comedy that we all need right now. This show is like nothing you’ve seen on tour in the UK ever before!

Willam said: “I had so much fun in the West End, I’m now excited to be touring the UK in Death Drop, a spectacular drag musical murder mystery. No spoilers please (I DID IT).”

Vinegar Strokes said: “Absolutely thrilled to be back on Tuck Island and touring the UK in this killer pro-duction. Whoever wants to buy me a drink, make it a double Redrum.”

Holly Stars said: “I’m so excited that Death Drop is going on tour with this all-star cast! The show was such a hit in London, I can’t wait to show the rest of the UK why Death Drop was such a killer success.”

TuckShop Creative Director and Producer Christopher D. Clegg said: “I am beyond thrilled that we get to take the smash hit murder-mystery comedy Death Drop on tour! Coming to some of my favourite cities with some of the best drag talent the World has to offers will be so fun, and I can’t wait for everyone to see what we have in store. This cast is so funny, so fabulous, and so fierce that to not take it around the country would be a crime!”

It’s 1991 and a gaggle of guests gather on Tuck Island for a soirée like no other. The tension rises as the outrageous guests reveal their suspicious and sordid pasts, and one by one they sashay away, until at the last, nerve-shredding, side-splitting moment the surviving guests find out who-dunnit!

This rampant, raucous, ridiculous romp of a murder mystery serves up all the drama, comedy, twists and turns you’ll ever need!

Lineup announced for free events at HOME’s Homeground on First Street and across city...

Layton Williams and Shane Richie to star in Everybody’s Talking About Jamie at The...