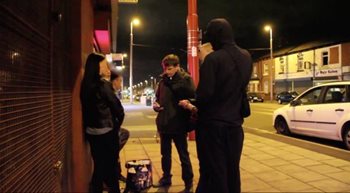 A PILOT project to tackle youth nuisance in Droylsden is being rolled out across Tameside after helping reduce anti-social behaviour (ASB) by half.

Tameside Council’s Youth Service conducted the pilot in Droylsden using a “detached” team of youth workers. They visited places where young people congregate to engage them and try to challenge their behaviour rather than simply move them on and disperse problems to another area.

They also worked with the community and business owners to understand the problems and support them.

Following the success, the Youth Service’s two detached teams will now be increased to a third team next month and rolled out to other areas.

A detached team has started work in Hyde, which has recently been affected by ASB, and a third area will be targeted next month.

Police say the work the Youth Service and PAC carried out contributed significantly to the reduction.

Emma Varnam, Tameside Council’s Assistant Director for Operations and Neighbourhoods, said: “It’s a minority of young people that cause problems. The detached teams went out on the streets to where we knew we would encounter groups of young people and built trusted relationships to support them with any issues they may have with the long-term goal of using that relationship to encourage young people to understand the consequences of their actions and to make different choices.

“If you move young people somewhere else it just impacts on others. It’s about empowering young people to make better choices instead.”

The detached youth workers also visited businesses to help resolve any issues and interacted with residents and visitors in town centres to listen to concerns and challenge myths.

After they supported one store and challenged a group of young people about their behaviour, problems stopped and one young person even visited the store to apologise.

Emma Varnam added: “It’s about negotiating an understanding and we are there to try and broker a relationship between two parties which generates a change in behaviour.”

Businesses have praised the youth workers for their help. The manager of one convenience store wrote to the council to thank them, saying their efforts had reduced problems.

The owner of an off-licence did the same, adding: “Before that kids use to come into the shop and cause trouble all the time but now it’s much better, which I and my whole staff appreciate. They are doing a fantastic job.”

Young people are also signposted to youth clubs and other activities. One project saw young people work with a Community Interest Company called PAC to create a film about the problems, using media, music and technology to engage them.

PAC also worked with six secondary schools on an interactive drama as part of Hate Crime Awareness Week and is involved in another production that features young people and helps analyse and challenge behaviour.

One third of premature deaths linked to social inequality