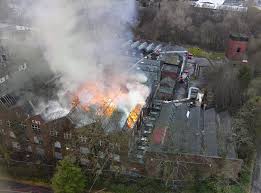 Police are treating as arson a fire that devastated a mill in Littleborough last weekend.

The fire at Hare Hill Mill on Saturday afternoon,was broke under control, with 12 nearby residents evacuated as a precaution during the incident and thankfully, no one was injured.

Several teenagers were seen leaving the mill at around 4.10pm that day and police would like to speak to them in connection with the fire.

Officers investigating the fire are treating it as arson and are appealing for witnesses to come forward.

Sergeant Richard Price of GMP’s Rochdale borough, said: “The scale of the fire was significant and it is astounding that no one was injured in the blaze.

“The local community were disrupted by this incident and I’m hoping that someone in the crowd knows something about how the fire started.

“If you have any detail, no matter how small, that you think could help with our investigation, please share this with us as a matter of urgency.”