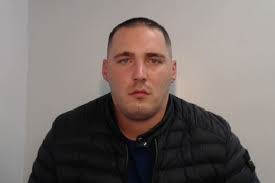 A man from Wythenshawe, who is prison after being convicted of conspiracy to supply class A drugs in 2019, has been ordered to serve an additional 8 months for failing to provide the passcode to his mobile phone during the investigation.

Nathan Lee aged 32 of HMP Forest Bank, pleaded guilty on Wednesday 5 February 2020 to failing to disclose the passcode to a mobile device under section 49 of the Regulation of Investigatory Powers Act 2000 (RIPA).

At Manchester Crown Court yesterday Lee was sentenced to an additional 8 months in jail, to be served consecutively with the six years and nine months he received in May 2019 for conspiracy to supply class A drugs.

The court heard how Lee’s mobile device was locked with a passcode and encrypted, and was an integral part of his offending. However, he had refused to provide the passcode of his mobile phone to detectives ever since his original arrest in Tuesday 25 September 2018.

Consequently, Lee was charged not only with conspiracy to supply class A drugs but was also given a section 49 notice. Lee admitted his guilt to the former offence in May 2019 but did not plead guilty to the latter until the start date of his trial on Wednesday 5 February 2020.

Detective Constable Adam Cronshaw, of GMP’s Serious and Organised Crime Group, said: “Hopefully this sentence goes to show the importance of disclosing relevant information in order for officers to investigate the content of a suspect’s electronic devices; whether it is a phone, computer or tablet.

“In this instance, the device used by Nathan Lee was a significant part of how he went about his drug offending and it was paramount to our investigation that he provided us with access to his device. Unfortunately for him, he has now suffered the repercussions of failing to oblige with this request.

“Today’s verdict also punctuates how serious we take this type of offending – if a suspect is not willing to cooperate with the police as the law states they should, then we will ensure that they face the consequences for this.

“I hope anyone who finds themselves in a similar position in future takes heed to today’s judgement and appreciates the severity of failing to comply with the police’s attempts to pursue justice and what the outcome will be for them.”

Three arrests and teenager in serious condition after stabbing in Droylsden