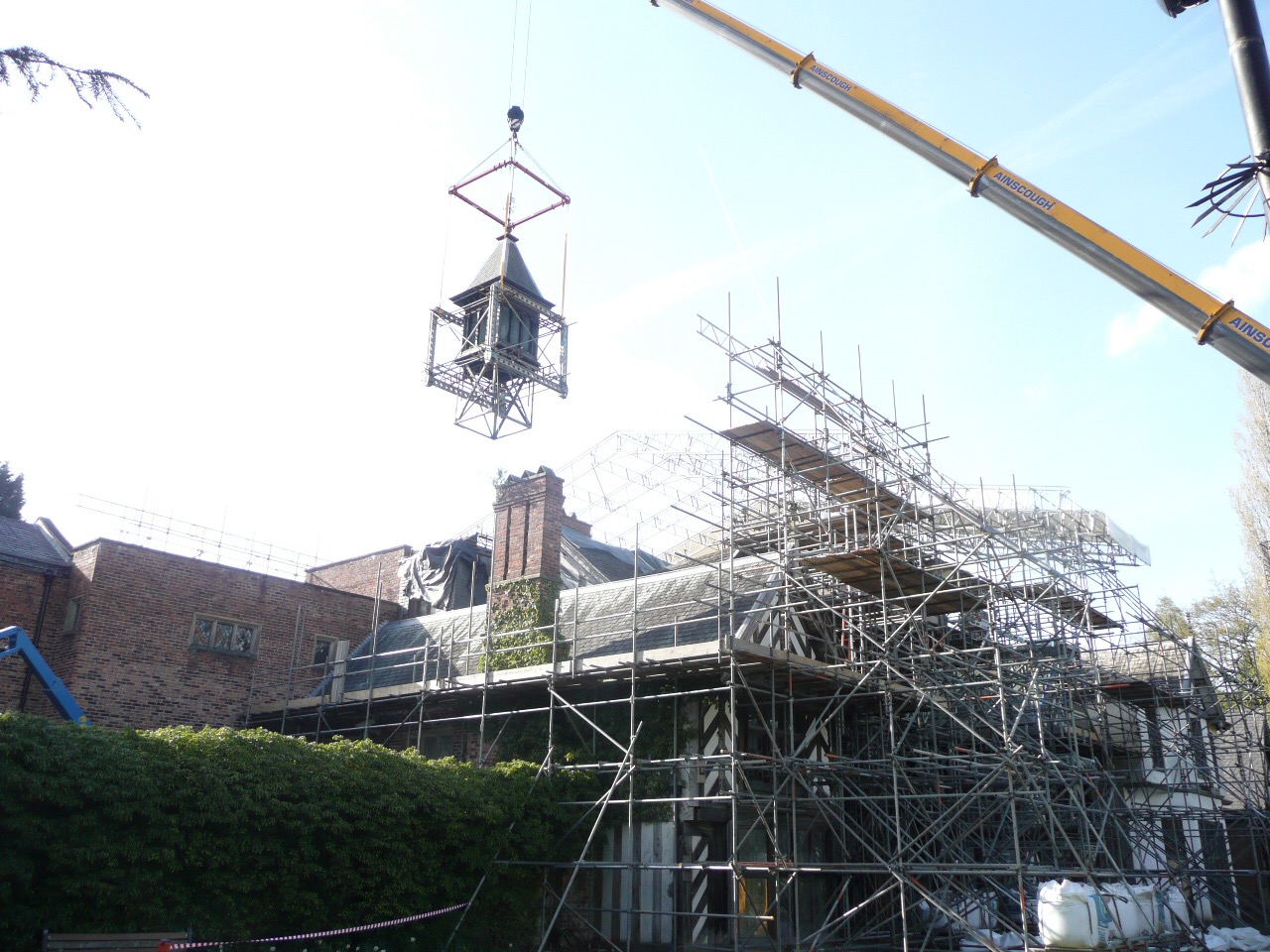 ﻿A new temporary roof has been craned on to the medieval hall, protecting the building from the elements to allow the wooden sections of the property to dry out.﻿
Since the fire at the Hall last month, an emergency tarpaulin has been used to protect the building while essential structural and archaeological works were completed inside.

The installation of the new temporary roof this week is the final piece of the substantial scaffolding structure that has been erected around the fire damaged area of the Hall and follows weeks of delicate conservation work inside the property.

These works will allow the building to breath and the timber frame to dry out properly and naturally as recommended by historic building specialists, including Historic England.

As part of this remedial work, the bell tower of the Hall was also craned off in a single piece to allow a seamless covering of the hall’s damaged roof.

The bell tower was rebuilt in the 1950s as part of a programme of repair work and its core is a more contemporary steel framed structure clad in timber. This meant that the tower did not collapse into the building during the fire and resulted in much less damage than would otherwise have been the case.

Since the fire, engineers have stabilised the property ensuring it is safe to work inside, while a team of archaeologists have been sifting through the debris in the building and recording, protecting and preserving as much original material as possible.

Now the immediate emergency works are well underway, proposals for the long-term recovery of Wythenshawe Hall will be put forward, working closely with the friends’ group and project partners.

Cllr Sue Murphy, Deputy Leader of Manchester City Council, said: “A huge amount of work has already gone into helping protect Wythenshawe Hall, most visibly the scaffold cocoon that is helping to stabilise the damaged areas of the property and will support the new temporary roofing.

“Inside, countless hours have been spent making sure anything that can be saved is saved. Everything from the largest pieces of furniture that were on display in the building, to the smallest artefacts being unearthed by highly-trained archaeologists.

“It will be a long road to recovery for the building, but working with our partners and the friends’ group, we will see Wythenshawe Hall back to its best.”

Paul Selby, Deputy Chair of the Friends of Wythenshawe Hall, said: “It’s been a rollercoaster few weeks for the friends’ group, but thankfully we are safe in the knowledge that the Hall has been saved, it is now stable and a dedicated team are on-site salvaging anything and everything that makes the property distinct.

“The hall’s insurance has allowed us to invest in a permanent marquee that will allow our monthly events to continue in the grounds of the Hall, and our ambition is to return to the iconic front of the building as soon as possible.”

Despite the fire, The Friends of Wythenshawe Hall group have continued their open days at the Hall using the nearby Courtyard Café as a temporary venue.

Plans announced for a £6.5m refurb for Bolton’s Albert Halls