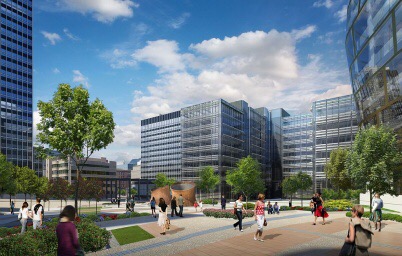 For those who lament the lack of public space, some good news perhaps?

NOMA have announced that work has begun on the second phase of public realm at the heart of their Manchester city centre development.

NOMA will create a public square between the CIS Tower, New Century House and Hanover, providing a safe and welcoming space and promise a mix of cafés, restaurants, bars and shops nestled amongst the characterful buildings of the NOMA listed estate.

It is due to be completed by September 2015.

The project, supported by the European Regional Development Fund, has been designed by Manchester-based architects Planit-IE, and contractors Casey are on-site undertaking initial construction works and is the first of a number of construction projects to begin on site at NOMA in 2015.

The partnership will create a 20 acres mixed-use district in the heart of Manchester.

Martyn Hulme, Board Director of NOMA (GP) Ltd , said: “This is a significant milestone for NOMA and marks the start of a pivotal year. Planit-IE and the team have designed a fantastic new space that will bring new energy to the very heart of NOMA. Residents, businesses and the whole community can look forward to seeing the new square take shape and enhance the city centre enormously’.

Manchester named City of the Year in prestigious development award