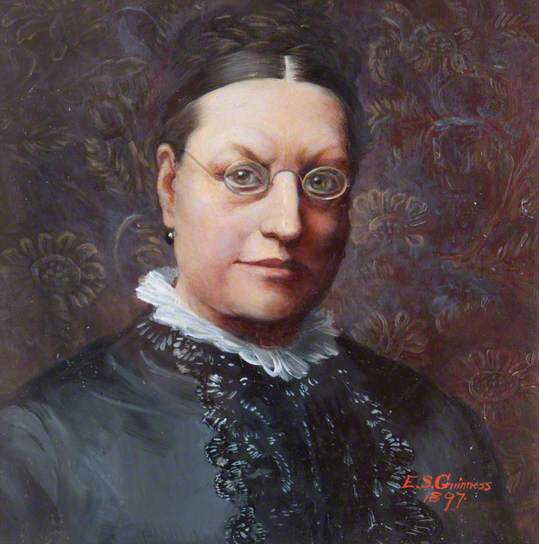 We continue our series on the twenty women who are contenders in the campaign for a statue in Manchester, Lydia Becker.

In September 1999, a plaque was unveiled at Foxdenton Hall in Chadderton, the family home of Suffragist and Campaigner Lydia Ernestine Becker.

During the ceremony Oldham councillor Margaret Riley observed, ‘Lydia Becker was important to Suffrage because she kept the flame alive when interest wained. There was interest in the 1860’s, which arose again in the beginning of the 20th Century. Lydia Becker bridged the gap. There is nothing more heroic than to work for a cause in which you believe, which is no longer fashionable’

The eldest of fifteen children, Lydia was born in 1827, the daughter of Hannibal and Mary Becker, her  father owned a Chemical plant in Chadderton, her grandfather having founded the firm when he emigrated from Germany.

Her early years followed the path of the daughter of an industrialist, educated at home, she developed an interest in botany, in 1864 winning an award for her collection of dried plants and in 1866 her book Botany for Novices, was published. She corresponded regularly with Charles Darwin and the following year Lydia founded the Manchester’s Ladies Literacy Society, intended as a society to study scientific matters.” persuading him to submit one of his papers to an early meeting of the organisation.

The previous year, her destiny changed, having heard Barbara Bodichon give a lecture on women’s suffrage. Bodichon had formed the first ever Women’s Suffrage Committee and toured the country where she held meetings on the subject.

Her speeches converted many women to the cause, including Lydia Becker, who wrote an article Female Suffrage for the magazine, The Contemporary Review. Emily Davies and Elizabeth Wolstenholme were two of the women who read the article and later that year they joined with Lydia Becker to form the Manchester Women’s Suffrage Committee. Wolstenholme then arranged to have ten thousand copies of the article printed as a pamphlet.

It was the beginning of a campaign that would last the rest of her life. In 1867, the name of Lily Maxwell appeared by accident on the electoral roll in Manchester. Lily was a widow who ran her own small business paying rates, and was just what Lydia was looking for for a test case. She then accompanied her to the Polling Booth where Lily successfully cast her vote for Jacob Bright.

That same year, the Radical MP, John Stuart Mill added an amendment to the Reform Act that would give women the same political rights as men. The amendment was defeated by 196 votes to 73 but during the debate,  Edward Kent Karslake, the Conservative MP for Colchester, said that the main reason he opposed the measure was that he had not met one woman in Essex who agreed with women’s suffrage.

Lydia, along with Helen Taylor and Frances Power Cobbe, decided to take up this challenge and devised the idea of collecting signatures in Colchester for a petition that Karslake could then present to parliament. They found 129 women resident in the town willing to sign the petition.

Back in Manchester, continuously writing articles, she established the Women’s Suffrage Journal as well as being involved in other campaigns, becoming treasurer of the Married Women’s Property Committee and also joining Josephine Butler in her campaign against the Contagious Diseases Acts.

When the Manchester Suffrage Society held the first Women’s suffrage meeting at the Free Trade Hall, Lydia moved the resolution.

The 1870 Education Act allowed women to vote and serve on School Boards. Lydia Becker was elected to the Manchester School Board where she took a strong interest in improving the education of girls in the city. Becker criticised the domestic education of girls in Manchester’s schools and argued that boys should be taught to mend their own socks and cook their own meals.

On the national front she caused controversy in 1874, supporting a move to promote a bill that would grant single, but not married women, the vote. For the unmarried Lydia this was a short-term strategy, however some married suffragists, including Emmeline Pankhurst, were outraged by her views and Lydia was forced to resign from the Married Women’s Property Committee.

In 1881 Becker took on the post of paid secretary to the Central Society for Women’s Suffrage. She held it for the next three years and in 1887 was elected as president of National Union of Women’s Suffrage Societies.
She died quite suddenly in Aix-les-Bains in France on July 18th 1890 where she had gone to convolesce.

Tameside Council to release 36 hectares of land for 1,500 new homes

Jason’s own brand of Halloween