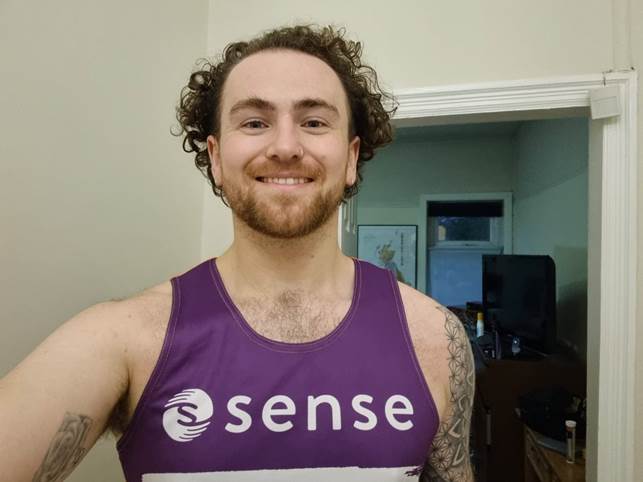 Mike Carter (29), an engineer from Withington, has a hearing impairment and will be taking on the challenge of a lifetime this Sunday 10 October by running the Manchester Marathon in aid of the disability charity, Sense.

Mike started running for the first time in May 2020 and this will be his first official race. He is hoping to finish it in under four hours and has already raised £1,000 for the disability charity.

Mike was born with a hearing impairment but only started wearing hearing aids when he was fourteen. The delay in his diagnosis was due to his early hearing records being lost because there was another deaf Michael Carter on the system. Before wearing hearing aids, he relied heavily on lip reading but he soon realised he was missing significant teaching at school.

The national disability charity, Sense, supports children and adults with complex disabilities, including those who are deafblind. Sense is an official partner of the Manchester Marathon 2022.

“I have a hearing impairment and wear hearing aids every day. It took me a good few years to accept my disability but I have had amazing help from my family, and support workers in school and university.

Times have been tough over the last few years, so I believe it is even more important to help people that need it the most!

I have never been into running at all, in fact, I really hated it when I was younger. But I started running in lockdown and wanted to fundraise for Sense as their work resonated with me due to my hearing impairment.

I’m looking forward to the race, I’ve heard the crowd really helps when things get difficult. I am a bit nervous as I don’t know what to expect, however, I feel confident that I’ve put the hours in training so it should be fine.”

“We are so grateful and thrilled that Mike, has chosen to support Sense by taking on the incredible challenge of running the Manchester Marathon.

“It’s thanks to people like Mike that Sense is able to support people with complex disabilities, including those who are deafblind, to communicate and experience the world.

“We wish Mike the very best of luck on the day and look forward to cheering him on from the side-lines.”

A new pooch podcast has been launched in a bid to help lonely dogs...