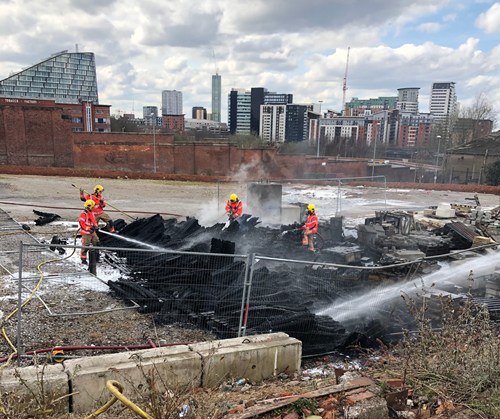 Fire crews battling a plastic’s fire in Ancoats which saw black smoke bellowing across the City Centre have now put the blaze out.

The fire brigade were on site for roughly one hour and 45 minutes and GMP have reopened Peary Street.

Watch Manager Neil Aylett from Manchester Central Community Fire Station said: “Alongside colleagues from Salford and Philips Park we worked quickly to extinguish the flames and reduce the smoke, which was thick and black and, had it spread, could have drifted over roads in the neighbourhood.

“Plastics burn very hot, as intense as a car fire in this instance, so despite the fact that this fire was soon under control we had to remain on the scene for some time to make sure the site was safe and the scene damped down.

“Although the smoke might have looked significant at the height of the blaze, in reality this was a fire GMFRS firefighters were quickly able to get on top of, bring under control and put out.”

Greenpeace and Friends of the Earth remove plastic pollution from River Irwell on World...