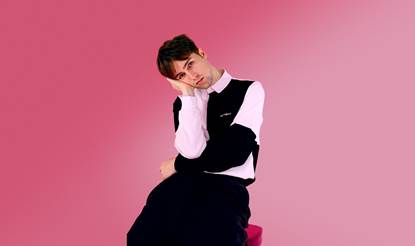 Will Joseph Cook has today made his highly anticipated return with the optimistic and uplifting track ‘Hey Brother’ – the Indie-pop wunderkind’s first new music since 2017.

Featuring bouncy guitar lines, syncopated rhythms and an instantly memorable chorus – ‘Hey Brother’ and the accompanying video offers a fresh insight into the brilliantly creative mind of the precocious songsmith.

A string of intimate shows have also been announced including shows at Bristol – Louisana, Nottingham – Bodega, Manchester – Deaf Insitutute and London’s Omeara where fans will be able to get their first glimpse of new material up close.

Will said: “This album is about my life from the last year and a bit and ‘Hey Brother’ chronologically is the start of it. It made sense to release it first thematically because it’s kind of about days blurring into one another and not knowing how to find fulfilment in music and creativity. But it’s also very optimistic in the face of that.”

Will Joseph Cook is one of the UK’s brightest young talents. Now 21 years old, Cook has been developing his multi-dimensional approach to crafting infectious songs since he was just 14.  This marks the first new music following the success of his debut album Sweet Dreamer and follow up EP If You Want To Make Money.  Switched on, earnest and self aware ‘Hey Brother’ sees him continue to tread his own path toward the alt-pop star he is destined to be.

Tickets go on sale 9am Friday 19th July and will be available from gigst.rs/WJC

Thaikhun is Encouraging Us to Dine the Thai Way

The Gruffolo due to be at the Lowry will now be live streamed between...