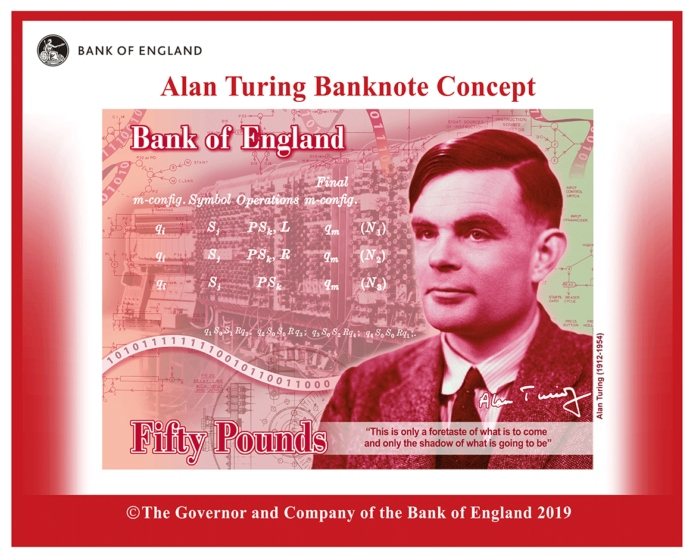 Making the announcement at the Science and Industry Museum in Manchester, the Governor of the Bank of England Mark Carney also revealed the imagery depicting Alan Turing and his work that will be used for the reverse of the note.

The new polymer £50 note is expected to enter circulation by the end of 2021.

In 2018, the Banknote Character Advisory Committee chose to celebrate the field of science on the £50 note and this was followed by a six week public nomination period.

The Bank received a total of 227,299 nominations, covering 989 eligible characters. The Committee considered all the nominations before deciding on a shortlist of 12 options, which were put to the Governor for him to make the final decision.

Mark Carney, Governor of the Bank of England, commented: “Alan Turing was an outstanding mathematician whose work has had an enormous impact on how we live today. As the father of computer science and artificial intelligence, as well as war hero, Alan Turing’s contributions were far ranging and path breaking. Turing is a giant on whose shoulders so many now stand.”

Alan Turing provided the theoretical underpinnings for the modern computer. While best known for his work devising code-breaking machines during WWII, Turing played a pivotal role in the development of early computers first at the National Physical Laboratory and later at the University of Manchester.

He set the foundations for work on artificial intelligence by considering the question of whether machines could think. Turing was homosexual and was posthumously pardoned by the Queen having been convicted of gross indecency for his relationship with a man. His legacy continues to have an impact on both science and society today.

Sarah John, Chief Cashier, said: “The strength of the shortlist is testament to the UK’s incredible scientific contribution.  The breadth of individuals and achievements reflects the huge range of nominations we received for this note and I would to thank the public for all their suggestions of scientists we could celebrate.”

The new £50 note will celebrate Alan Turing and his pioneering work with computers.

As shown in the concept image, the design on the reverse of the note will feature a photo of Turing taken in 1951 by Elliott & Fry which is part of the Photographs Collection at the National Portrait Gallery.

A table and mathematical formulae from Turing’s seminal 1936 paper “On Computable Numbers, with an application to the Entscheidungsproblem” Proceedings of the London Mathematical Society. This paper is widely recognised as being foundational for computer science.  It sought to establish whether there could be a definitive method by which any theorem could be assessed as provable or not using a universal machine. It introduced the concept of a Turing machine as a thought experiment of how computers could operate.

“It is almost impossible to put into words the difference that Alan Turing made to society, but perhaps the most poignant example is that his work is estimated to have shortened the war by four years and saved up to 21 million lives.

“And yet the way he was treated afterwards remains a national embarrassment and an example of society at its absolute worst.

“I’m absolutely delighted that Turing will be the face of the new £50 note and I hope it will go some way to acknowledging his unprecedented contribution to society and science.

“It is a fitting and welcome tribute to a true Manchester hero.

“But more importantly I hope it will serve as a stark and rightfully painful reminder of what we lost in Turing, and what we risk when we allow that kind of hateful ideology to win.”

Chances of Manchester’s hotel and hospitality industries bouncing back completely following the relaxing of...