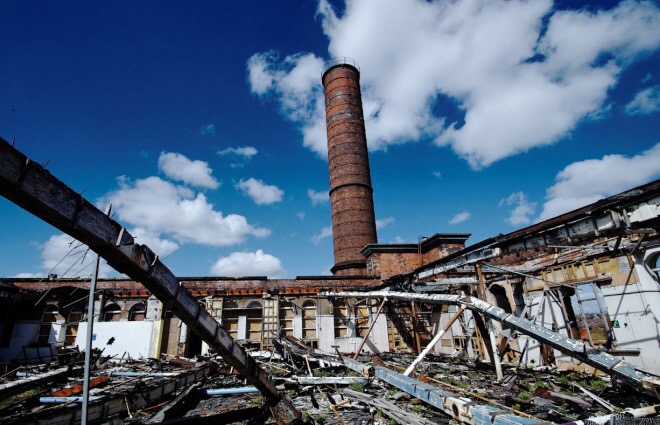 The Rylands Mill which has been derelict since the early 2000s now needs a new owner to secure its future and is included among three Lancashire & Greater Manchester buildings on its 2016 list of the Top Ten Endangered in England and Wales.

The building was last occupied by Wigan and Leigh College but has lain derelict since the early 2000s.

Although designed to be fireproof, the mill has suffered regular fires in recent months, resulting in the demolition of a 20th century extension. Locals remain concerned about the lack of vision for the site where children risk their lives trespassing. Ideally located next to a public park, the mill is currently for sale £2,500,000. The owners must be certain that a sale at this price is possible and, in the meantime, properly secure the site before someone is seriously hurt says the Society.

Also close to Wigan and named in the top ten was the St Joseph’s Seminary in Upholland, which the society says needs new purpose to avoid decaying further.

The large and impressive three storey complex of gothic sandstone buildings, reportedly sits at the geographic centre of the Roman Catholic Diocese of Liverpool and bears witness to a time when many young men wanted to train to become priests.

Numbers dramatically declined after the 1960s and the seminary became a boarding school in the 1980s for boys considering a vocation.

Alumni reportedly include the comedians Tom O’Connor and Johnny Vegas (who is said to have left after becoming homesick).

The buildings closed in the early 1990s and have been slowly decaying ever since, becoming a mecca for ‘urban explorers’ some of whom have damaged the interior. Just 15 minutes’ drive from Wigan surely a residential conversion is possible says the Society

Victorian Society Director, Christopher Costelloe, said: ‘Lancashire and the north west has more buildings on our Top Ten than anywhere else in the country. But for the first time we have no entries for London or the South East. We simply got far more nominations from areas like Lancashire. This perhaps reflects the vastly different financial climate for development. But whatever the reason, I hope inclusion in the Top Ten will spur local authorities and owners to urgently find a way to bring these buildings back into use. At a time when there has been much discussion of creating a northern power house this is more important than ever. Retaining historic buildings like those in the Top Ten is vital to maintaining local identity and creating places in which people want to invest, live and work.’