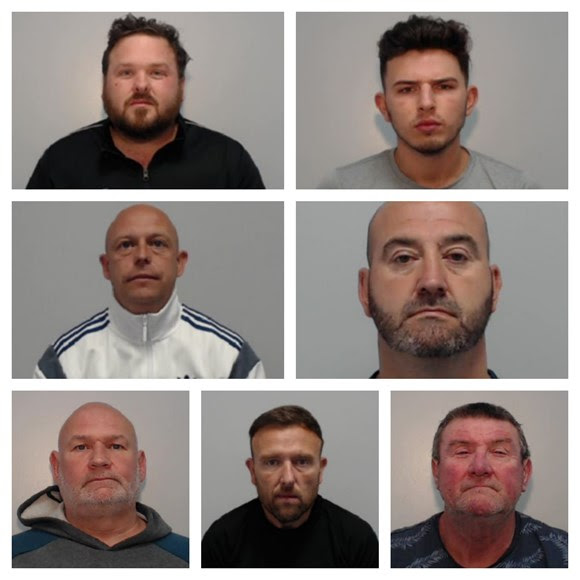 A drugs gang of seven men from Wigan, have been jailed today for a total of seven decades, after being convicted of offences including conspiracy to supply cocaine and money laundering, following a six-week trial at Bolton Crown Court.

The court heard during the trial – which ran from November 2021 to January 2022 – how the investigation – codenamed Operation Trinket – was initially launched by Wigan’s anti-gang cops following arrests on Friday 20 July 2018 across the town, uncovering an organised criminal drug supply network.

They had followed a period of intensive surveillance by specialist staff; with officers from GMP Wigan’s Challenger team executing the first phase of raids at the home addresses of the suspects, including: Paul Witter (43) and his wife Jane Witter (38); Marc Talbot (50), his brother Michael Talbot (42), and Marc’s son Cameron Talbot (24).

The group were all arrested on suspicion of being involved in a conspiracy to supply cocaine and money laundering.

Hundreds of items including quantities of drugs, cash, mobile phones and SIM cards were seized for examination, along with hundreds-of-thousands of pounds worth of assets seized under Proceeds of Crime Act powers, in the form of high value designer clothing, jewellery and prestige vehicles – which demonstrated the lavish lifestyles some of the suspects enjoyed – funded by their illegal activity – despite declaring very little in the way of official income to the authorities.

As a result of this initial investigation, evidence of a wider network was soon pieced together from within recovered mobile phones and SIM cards, identifying three further suspects also involved in the wholesale supply of cocaine over a seven-year period, dating back as far as 2011.

Those further suspects: Paul Whittaker (55), Thomas Tither (64), and David Barnes (48), were also arrested following further drugs warrants at their home addresses during May and June 2019.

The court heard how many of the group made vast profits through the wholesale supply of cocaine; with Paul Witter, Marc Talbot and Michael Talbot acquiring their high purity cocaine from Paul Whittaker, who was said to play a leading role, directing his second in command, Thomas Tither, to carry out transactions on his behalf with Witter and Talbot, who oversaw and directed the further sale of cocaine through their criminal network.

A number of the group registered themselves as the directors of Limited companies, including: ‘WTR Sheds’ – owned by Paul Witter – ‘Mikey’s Sweet Dreams’ Ice cream parlour – registered by Michael Talbot – ‘Botatelli’s Ice Cream’ – registered by Marc Talbot – and later a take-away belonging to Paul Witter – ‘Spudway’ – which were said to be set up with the intention of laundering the vast amounts of cash derived from their criminal activities.

In the lead up to the drugs raids, Marc and Cameron Talbot, were observed during surveillance at Marc’s address, removing an Umbro holdall from the boot of Marc’s car parked on his driveway, and placing it into a van driven by Cameron before he left.

One week later, the same van was searched outside Cameron Talbot’s address during the series of warrants, and an identical holdall was found within it containing a large amount of high purity cocaine, digital scales, and mixing and packaging materials used for the adulteration of cocaine.

When forensically examined, several fingerprints were found on the packaging materials and drugs belonging to Cameron Talbot.

From within Mikey’s Sweet Dreams’ premises, further digital scales, mixing equipment and drugs adulterants were also recovered – demonstrating that the businesses were not quite being used as they suggested.

Cameron Talbot ordered quantities of cocaine and cutting agents from his father Marc Talbot and the pair regularly messaged each other regarding money owed and stocks of Cocaine remaining.

Messages from mobile phones also showed that Michael Talbot was also employed by Paul Witter and was directed by him in the supply of Cocaine by Witter and Marc Talbot.

During a search of Tither’s home address in May 2019, further large amounts of high purity and ‘street’ purity Cocaine already packaged and prepared for supply, were also recovered.

Text messages also showed that Paul Witter directed Jane Witter and Marc Talbot and others in the production, packaging and sale of cocaine.

Images were downloaded from a handset belonging to Paul Witter of large bundles of cash and three “tick” lists with records of large sums of cash into tens of thousands of pounds, both owed and paid for cocaine supplied.

Messages from the same handset also showed that Witter and Talbot controlled “street dealers” employed to sell cocaine for them.  Messages also showed that Jane Witter and Marc Talbot facilitated meetings between Paul Witter and Paul Whittaker to source quantities of cocaine and adulterants for sale.

Paul Whittaker was said to be the ‘upstream’ supplier to the group and directed Thomas Tither in the supply of cocaine. Code words were often used by the group within text messages, with Whittaker describing the different qualities of ounce amounts of cocaine for sale as ‘Tickets’, and being of ‘Championship’ or ‘Champions League’ quality in an attempt to avoid detection by the authorities.

Paul Whittaker, Thomas Tither, Michael Talbot, Cameron Talbot and David Barnes, all denied the offence and pleaded not guilty; however, following the trial during which Whittaker and Tither declined to give evidence, they were all found guilty as charged.

A dealer supplied with cocaine by the group throughout the conspiracy was David Barnes. Messages showed that David Barnes requested quantities of cocaine from Paul Witter and Marc Talbot which he then supplied to others and would then be ‘restocked’ with further amounts for sale.

Messages were passed through Jane Witter to facilitate access to the drugs which were supplied to Barnes, although during trial Barnes gave evidence that the messages were purely in relation to him sourcing and selling on bottles of ‘red wine’ on the illegal market.

The jury hearing the case, however, saw through this account and found him guilty, along with his co-accused.

29 year old woman in serious but stable condition after being attacked in Strangeways...