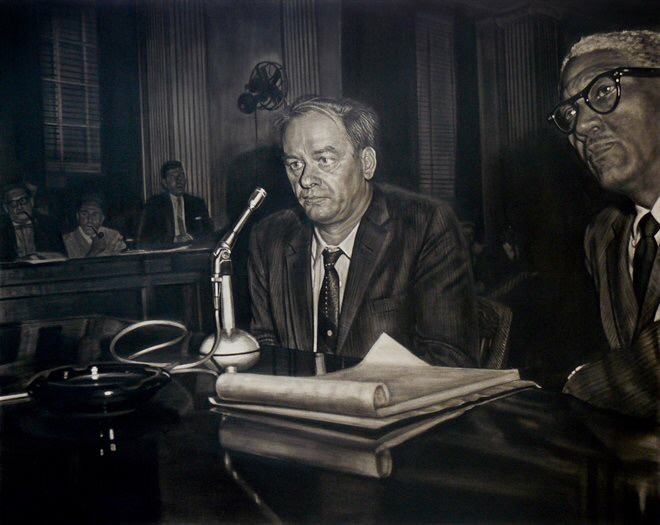 University of Bolton lecturer David Gledhill is exhibiting a series of paintings recalling a time when immigration, radicalisation and ideology came to Hollywood.

At the Contemporary Art Space in Chester, McCarthyism is on show from 5-26 February 2016. David’s images explore the start of the cold war in the USA, when the communist threat was perceived as imminent and even film stars were not above suspicion.

Curated by Mike Chavez-Dawson, McCarthyism is an exhibition of paintings based on American press photographs of the House Un-American Activities Committee hearings of the 1940s and 50s. The committee was dedicated to the exposure and elimination of the communist threat in every branch of American life. Trade unionists, teachers, secretaries, janitors, artists, actors, writers and directors were amongst those forced out of their jobs.

Senator Joseph McCarthy of Wisconsin did not sit on the committee himself, but his virulently anti-communist speeches of the early 1950s gave rise to the term ‘McCarthyism’ which has become synonymous with the ‘red scare’ of the post-war years in the USA.

The source photographs used for the project were bought online from Detroit and Chicago newspaper archives. The backs of the photographs are covered with editor’s remarks and filing references which reflect general attitudes to the perceived communist threat, and these have been used for the titles of the paintings.

Said David: ‘At a time of increasing surveillance and renewed talk of the ‘enemy within’, McCarthyism is a timely reminder of the dangers implicit in the narrowing of political life, and the risks to civil liberties of scapegoating minority groups in society.’

A senior Lecturer in Fine Art at the University, David is a professional artist and has exhibited widely both nationally and internationally. In addition to his activity as an artist David has contributed writing and reviews to numerous artists’ projects and publications. He is co-administrator of Rogue Artists’ Studios in Manchester.

His current work centres on the use of personal, commercial and institutional photographic archives to produce series of paintings that address historical and political themes through the lived experience of their subjects.

He was recently awarded a Manchester Cornerhouse (now Home) commission to produce a film about his work with an East German family photograph album. In November 2015 he was the recipient of the prestigious Jenkinson Award from the University of Bolton for his work on the Berlin Olympics of 1936, to be exhibited at Deutsche Kreditbank AG in Berlin in July 2016.