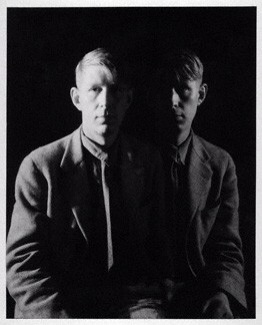 It is almost certain that Shakespeare never set foot in Manchester, we know though that WH Auden certainly did at least on one occasion.

Professor Andrew Biswell’s inaugural lecture earlier this week, the opening of Manchester Metropolitan University’s Humanities in Public Festival Programme, offered a full account of Auden’s criticism of Shakespeare’s sonnets and the connections with the Sonnets written by Auden in the 1930’s drawing on new research into his manuscripts,letters and unpublished writers.

Biswell, professor of Modern Literature at the University and Director of the International Anthony Burgess Institute, took the audience through a decade in the life of the acclaim poet and writer.

Auden came to Manchester on the 10th Nov 1934, giving a talk to the Manchester Literary society at the University, where he divided literature history into three distinct periods. Medieval, from 1000-1500, capitalism from the Renaissance to the Industrial Revolution and socialist, whose great philosphers were Marx and Freud both reactionaries against nineteenth century capitalism . He then predicted a new era of poetry was about to be born, but as Biswell illustrated, over the next five years his philosophy changed.

Auden was certainly the most influential poet of his generation, the youngest of three brothers, born in 1907 in York, brought up in Harbourne in the suburbs of Birmingham, he would identify himself as the lucky third son of the fairy tales.

He originally wanted to be a marine engineer, converting to poetry at the age of 16.

In 1928 he went to Berlin, a few months after graduating with a Third Class Degree from Oxford, the result not of idleness but unwillingness to study the texts of his course.

He stayed for eleven months, forming relationships with a number of working class men along the way and writing in his journal that he was a young man tying to make sense of his sexuality and testing his poetry.

The journal makes interesting reading, containing sketches, poetry and observations on German Gay slang, worries about which books to take on a weekend with a German sailor in Hamburg.

One of the books was Shakespeare’s sonnets which he read while he waited all night after the sailor had absconded with his money only to return to declare himself heterosexual after all.

As the 1930’s progressed his sonnets became more sophisticated. As for what he thought of Shakespeare we have only the notes of two of his students at a lecture in New York in 1946 to give any insight.

He talked of the way that Shakespeare wrote, of the dry complex emotions to interpret , why, he asked, should so much poetry be written about love, instead of eating, of which you get as much pleasure, or of the family and mathematics.

Falling in love he defines as the discovery of why you exist, love heightening one’s awareness of existence and your interpretation of the world.

Much of his lecture that day in 1946 was a series of quotations surrounded by fairly weak commentary but what he did was to paraphrase what Shakespeare was saying but with much disconnection for the original words of the Bard, instead, pursuing his own private agenda

‘There aren’t any pure accidents of love’ he told his audience, starring with glazed over eyes as if that was his own experience.

Auden, said Biswell, was looking into Shakespeare and found his own reflection looking right back at him, like many before him and since, but Shakespeare would also open a door onto his own poetry and love sonnets.

In 1933, he fell in love with a younger man and it led to a new phase and intensity of writing, five sonnets were published in the magazine New Verse in October of that year.

They were,said Biswell, some of his most strident statements on love, yet Auden suppressed them during his lifetime and they have never been published in complete form and without revision since.

Auden also wrote love poems for Benjamin Britten, they collaborated in a number of ventures, none more famous than Night Mail, for which Britten wrote the music.

The composer suppressed his homosexuality and when Auden sent him one of the sonnets in a plea of love, Britten misinterpreted it believing it had been sent simply to set it to music which he duly did.

It was now 1936, ‘Tell me the truth about love’ one of the collaborations with Britten parodied the idea of love, the show song became a hit on both sides of the Atlantic

Auden would leave his love poetry behind, turning his attention from his private thoughts to social realism

In 1938 he traveled to China and Japan with his former partner and friend Christopher Isherwood with a commission to write about the Sino Japanese war.They arrived just after the massacre of Nanking meeting Chiang Kai Shek, the Chinese nationalist leader

On their return to Europe, they published a journey to a war in 1939, a mixture of travelogue, prose and verse, which was well acclaimed.

Auden began working on a series of poems, considered by some to be his finest work , twenty seven in all, the best spoke of the war he witnessed and there is evidence he drastically revised them

The poetry was now public, it speaks with authority, and Auden knew war was coming to Europe.

He left Europe for America before the outbreak.Some felt he was escaping the forthcoming war, but for a poet that wanted to change the world, he felt with war about to break out he had failed, the utopian society he predicted when he came to Manchester was now a distant dream.

For more information about this year’s programme see www.hssr.mmu.ac.uk