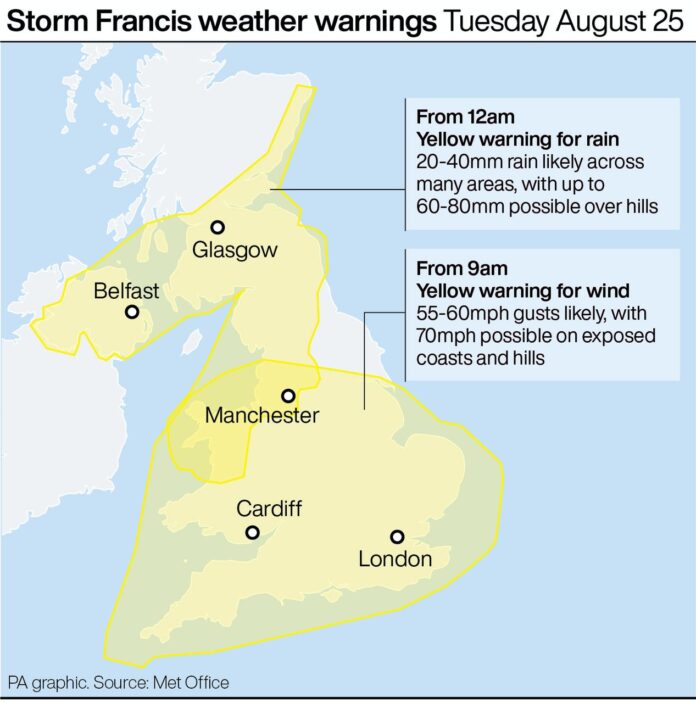 The UK has been braced to expect an “unseasonably wet and windy spell”, as Storm Francis reaches the west of England from the early hours of Tuesday.

Forecasters predict winds of up to 70mph and heavy rainfall – up to 90mm in places – during a 36-hour weather window.

It follows a similar period of unseasonable weather towards the end of last week, coinciding with the arrival of Storm Ellen.

Heavy rain is expected to hit the region in the early hours of Tuesday morning with the Met Office warning of winds for a 24 period starting at 9.00am tomorrow.

Nicola Maxey, press officer for the Met Office, said : “Since 2015 when we started naming storms, we have never had to name a storm in August – and now we’ve had two in a few days.

“There are a lot of people on holiday in the UK at the moment, going camping and on walking breaks, many in coastal locations where the winds are likely to be stronger, so it is worth checking on the Met Office website ahead of time.”

Forecasters said the winds were “unusual” for August, and might result in transport disruption and impacts on outdoor activities.

Women with cerebral palsy punched on the head during attempted robbery in Tyldesley Town...

Manchester Airport Group reveals impact of pandemic on passenger volumes as it calls for...