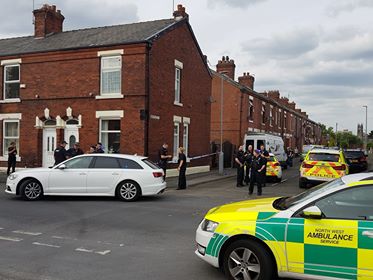 The family of a man who died following a shooting in Ashton on Wednesday afternoon has tribute to him.

31-year-old Luke Paul Graham from Audenshaw, was taken to hospital where after being gunned down on Birch Street in Ashton, where he sadly died from his injuries.

Paying tribute to him, his father Pete Graham said: “Luke was a loving son, dad and brother, who was always there for his family and friends.

“He was the type of person who would go out of his way to help others and now we are broken as a family. We can’t believe that he’s gone and that he has been taken from us in such a horrific and cowardly act of violence.

“We pray that the people responsible for this are bought to justice and I would urge anyone out there who has any information to contact the police as a matter of urgency.

“Losing Luke has devastated me as a father, and I wouldn’t want any other parent or family to go through the hell that I am living in at the moment.

“I would just like to thank the police for their tireless efforts in trying to piece together what has happened and would especially like to thank the community at Birch Street in Ashton where Luke passed away. People there risked their own safety and tried their best to save Luke when he was killed that evening.

“It is a great comfort to me as a dad that he did not pass away alone and that there were people there for him.”

A 28-year-old man who was also arrested on suspicion of murder remains in custody for questioning.

30 year old man recovering after being shot on Albert’s Restaurant on East Lancs...

Six arrested after man stabbed to death in Oldham