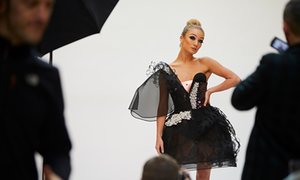 Graphene is the worlds first new wonder material which is as close to a two dimension material there can be as it is only one atom thick.

Now it has entered the world of fashion with the unveiling of a dress that stays true to the two dimensions as it is cut from just one piece of fabric.

The dress is a partnership involving wearable tech pioneers Cute Circuit and the Graphene Institute at the University of Manchester and according to its designers has:

‘futuristic features including a graphene sensor which tracks the models breathing, adapting its LED lighting to breathing patterns, and utilising its translucent graphene circuitry.’

To the layman, that means it will change colour according to the wearers nreathing rate, breathing fast, the graphene panelled dress will glow purple while slow and deep breaths will give parts of the dress a slightly turquoise hue

It was unveiled yesterday at the Intu Trafford Centre,

Dr Paul Wiper, Research Associate, National Graphene Institute said: ‘The dress is truly one of a kind and shows what creativity, imagination and a desire to innovate can create using graphene and related two-dimensional materials.’