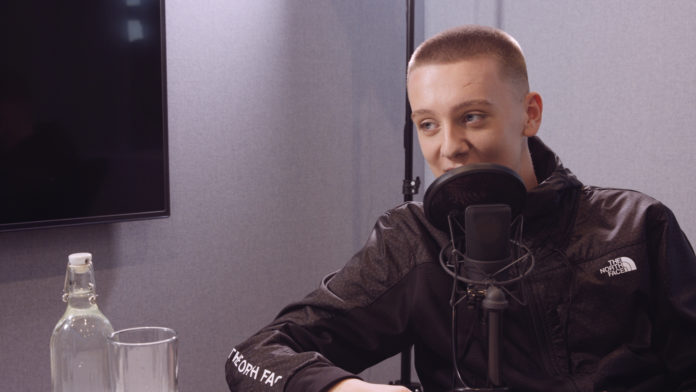 Mancunian rapper Aitch says he used to walk to his job on a building site in Manchester with plasterboards covering his face so no one would recognise him.

The 19-year-old music artist – real name Harrison Armstrong – was speaking to and JD Sports on their inaugural podcast In the Duffle Bag.

On becoming famous, he said, “I didn’t want to walk down the street no more and people recognising me. I was walking with plasterboards covering my face so no one could see me!”

Aitch, who hails from New Moston, had a job working on his grandad’s building site in Manchester when he got his first recording contract. He recalls the ironic period of his life when he was ‘famous’ yet still having to work, “What was so annoying was working right in the middle of town and my music career was just getting better and better.

“I’m walking down Deansgate with a high-vis and boots on and everyone beeping at me. The music’s going this way (up) but I’m still working!”

Aitch initially rose to fame amongst his classmates at St Matthew’s after his friend uploaded a video of him rapping to YouTube – which soon spread around the school, “I think at that point I was gassed (excited).

“I might have gone to the city centre one or two times and been recognised but realistically it was just the ends (New Moston) that knew me. No one who knew me already asked for a picture, anyway, it was more like ‘yeah, there’s Aitch’.”

Aitch left St Matthew’s with 3 GSCEs; and after a short time at college, began working on his granddad’s building site, all while making music that was going viral, “It was so mad at that point because I had so much popularity and I still had no money – I was like how do you get paid for music?”

It was the release of ‘Straight Rhymez’ in 2018 that caught the attention of Stormzy, as well as several record labels, who Aitch reveals, were quick to get in touch, “Initially, we weren’t pitching, we were just doing radio sets and just being involved in little things. After Straight Rhymez, everything just flipped – we just got a phone call off everyone.”

You can see the full podcast here.