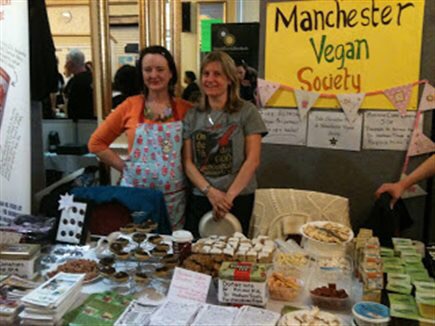 The Northern Vegan festival returns to Manchester thus weekend and vegan model, CEO and co-founder of K-9 Angels dog rescue charity as well as radio host Victoria Eisermann will be opening the festival.

Victoria has starred in many TV commercials, amongst the most well-known being the pregnant bride in the Guinness commercial, the Birdseye Pea girl and appearing Sony mini disc to name a few.

Apart from the 185 stalls, who include 16 caterers offering a wide variety of vegan food (Indian, Caribbean, Malaysian, Mexican, Turkish, American street food, and British), and numerous other food stalls, including a vegan pet food stall, 2 vegan shoe stalls, and numerous charities and campaign groups, there will be a vegan beer and cider festival at the Thirsty Scholar vegetarian/vegan food pub, free food from numerous vegan companies, films and talks all day, children’s book readings, and speed meeting and dating.
Greater Manchester has the second largest number of vegetarian and vegan cafes and restaurants in the UK after London’s roughly 130. There are currently almost 40 on our links page, and 4 vegan cafes are either in the process of opening, or have just opened