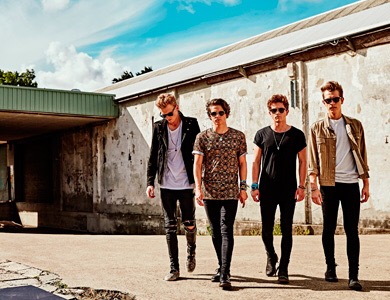 The Vamps are huge growing stars on the UK music scene and since 2013 they have scored a multi-Platinum debut album, sold over two millionsingles, had five Top 10 singles in the UK, won multiple awards (including three at the Radio1 Teen Awards), graced the covers of some of the biggest magazines, played many sold out shows and tours, and caused pandemonium everywhere they visited.

They are the first names confirmed for the biggest event of Blackpool’s year, the Blackpool iFest Illuminations Friday night Switch-On (Friday September 4) which will see the resort’s famous Lights switched on for the first time marking the start of the annual Illuminations season.

“They are huge names on the UK music scene and the incredible numbers they generate in terms of interest show what a massive following they bring with them.We will be announcing more names, including special guests and our Switch-On star, soon.”

The Friday night Switch-On kicks off an exciting weekend of events at the Blackpool Tower Festival Headland between Friday 4 and Sunday 6 September with something for everyone to enjoy.

The Saturday night of the Blackpool iFest weekend will feature a line-up of chart-topping pop stars in association with Sky’s Vintage TV channel.

The line-up includes Bananarama, Jason Donovan and Paul Young, and will be hosted by TV and radio star, Pat Sharp.

Then on Sunday, some of the coolest names in British comedy will take to the stage, with one of the most recognisable and successful comics in the UK, Al Murray – The Pub Landlord, hosting and headlining the show alongside the likes of Chris Ramsey, Alun Cochrane, Tiff Stevenson, Carl Hutchinson and Craig Campbell.

Pupils ignorant of Britain’s role in the Holocaust – even after they have studied...