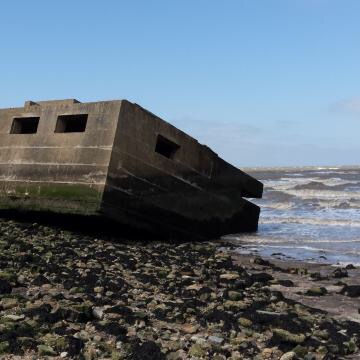 Thousands of archaeological sites along England’s coast and tidal estuaries are being destroyed by extreme weather, rising sea levels and tidal scour.
CITiZAN, the Coastal and Intertidal Zone Archaeological Network, is the first national community-led project to tackle the alarming threat to our heritage. Today, CITiZAN is calling for an army of volunteers to help survey and monitor these nationally-important but vulnerable archaeological sites before they disappear.

One of the largest community archaeology projects in the country, taking in 5,600 miles of coastline over 500 miles of tidal foreshore, CITiZAN runs free community-based training, building a network of volunteers with the skills and systems needed to survey and monitor threatened sites. Armed with tape measures, buckets and mobile phones, volunteers create standardised records of exposed archaeological sites.

Gustav Milne, CITiZAN project leader, said: “We can’t stop the tide but we can record these incredibly important archaeological sites before they are destroyed. We are calling on local communities to join our network and help to survey their local coastal heritage sites before they are lost forever.”

“We can’t stop the tide but we can record these incredibly important archaeological sites before they are destroyed.” says Gustav Milne, CITiZAN project leader

Heritage Minister Tracey Crouch said: “As someone who grew up on the coast I believe this to be a hugely important project to record the fascinating history of our coastline. The 70,000 sites that are at risk tell the story of our shared national heritage, so it’s vital they are surveyed before the sea takes them. No where in Britain is more than 70 miles from the coast, so I would urge anyone to take the opportunity to get involved.”

Via a web-based recording system and app, a constantly evolving crowd-sourced database and interactive map of sites is being compiled. The database preserves the knowledge of these important sites forever and is a unique and valuable resource that opens the door to new research opportunities.

Hosted by MOLA (Museum of London Archaeology), the CITiZAN project has been awarded £1.4m from the Heritage Lottery Fund, enhanced by the National Trust and The Crown Estate’s stewardship programme, together with support from Historic England.

Ben Greener, HLF’s Historic Environment Advisor, said: “Our coastlines are an enormous hidden repository of the remains of war defences, industry and ancient settlements providing a fascinating insight into the history of this island nation. It’s a huge job to record thousands of these sites before they are lost for good and the Heritage Lottery Fund is encouraging as many people as possible to don their boots and join CITiZAN at their nearest site.”

The three-year project operates across England from regional centres: with MOLA in London, with partners the Council for British Archaeology in York and the Nautical Archaeology Society in Portsmouth.