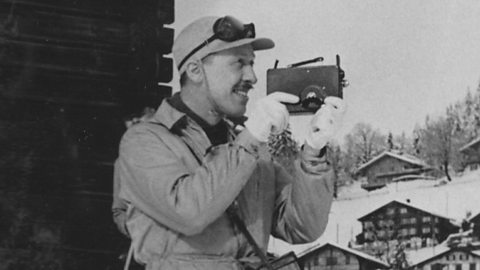 Lost Films of World War II tells the story of what it felt like to live in Britain during the war through eyewitness accounts and home videos of ordinary people.

The NWFA at Manchester Metropolitan University has supplied the programme with a series of films made by the founder of an evacuation school for children in the village of Yealand Conyers, in Cumbria.

Geoff Senior, Collection Assistant at the North West Film Archive, said: “The film is both important and interesting as the school itself was very unusual, but the film was shot in both black and white and in colour at a time when all film was hard to obtain and expensive – especially colour filmstock.”

The school was open from September 1939 to July 1944 for children aged between three and 12 years, as well as a number of refugees, and was staffed almost entirely by volunteers.

The films follow the activities the children undertook within and around the school, such as an evacuation experiment and PE lessons.

The team at the NWFA was also able to put the producers in touch with the daughter of one of the founders of the school and original filmmaker of the material.

They also provided a more well-known film “School Life in Wartime”, which was made at the Elworth Church of England Primary school in Cheshire. The film shows both local and evacuated children attending the school, taking part in air raid drills and knitting squares for blankets.

Geoff added: “This is a really nice film because these are classic scenes which will resonate highly with anyone who lived through that period as a child.”

The two-part series Lost Films of World War II started last Thursday, September 5, to commemorate the beginning of the war 80 years ago.

The final part to the series will be shown on BBC Four at 9pm on Thursday, September 12. You can also catch up on both episodes on BBC iPlayer.

“The police do not want to get into the game of having to count...