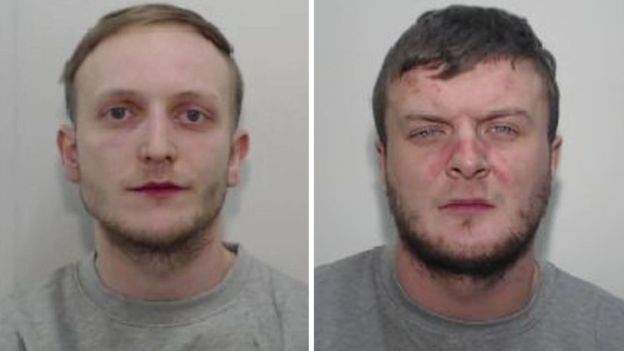 Two men have been found guilty of the murder of four children in Walkden after they torched their house with two petrol bombs last December.

Zak Bolland, 23, and David Worrall, 26, were found guilty of murdering Demi, Brandon, Lacie and Lia Pearson after three days of deliberation by a jury at Manchester Crown Court today.

A third person, Courtney Brierley, 20, was found guilty of four counts of manslaughter over the deaths of the children following the blaze on December 11th.She was sentenced to 21 years in a young offenders institution.

Bolland was also found guilty of the attempted murder of the children’s mother Michelle Pearson, their older brother Kyle Pearson, and his friend Bobby Harris while Worrall was found guilty of attempting to cause grievous bodily harm with intent.

During the course of a four week trial, the court heard how Bolland, Worrall and Brierley made homemade petrol bombs in the kitchen of a nearby address.

Brierley then waited in a nearby car while Bolland and Worrall smashed through the kitchen window of the Pearson’s home and threw homemade petrol bombs into the kitchen and living room.

This left no possibility of escape for the young children or their mother as the house was immediately engulfed in flames.

Detective Chief Inspector Lewis Hughes from GMP’s Major Incident Team said: “This is one of the most heart breaking cases I have ever dealt with.

“I am glad that the sentences these three have received today reflect their atrocious acts, but nothing can change what has happened and nothing can bring back the children.

“I would like to commend the bravery of the children’s family. I can’t even begin to imagine what they have been through.

“My thoughts will always be with their mother Michelle, along with their father, brothers and wider family and friends.

“They have all shown a phenomenal amount of strength during the most devastating of circumstances.

“When Bolland, Worrall and Brierley planned their attack, they knew that innocent children were asleep in their beds.

“They smashed the kitchen window and threw their handmade petrol bombs inside. The fire spread so quickly and the heat was so intense that the smoke alarms melted before they had chance to sound. This left the family with virtually no chance of escape.

“Understandably the children’s family will still have questions which we will continue to try and answer.

“Michelle Pearson is still in hospital and will be for some time to come. I wish her the very best with her recovery.

“I hope achieving some justice can give her a small amount of peace in these most difficult and tragic circumstances.The children’s family should now be given the time to grieve and finally lay the children to rest.”

Councillor David Lancaster, lead member for environment and community safety, Salford City Council said: “Justice has been served on the three people who carried out this unspeakable crime and they have been given lengthy prison sentences.

“No punishment, however, can ever diminish the horror of their appalling actions, those minutes of madness in which an evil attack was planned and carried out with deadly consequences. No words can ever fully express Salford’s shock and anguish at the loss of those innocent lives and the harm done to the Pearson family. The hearts of everyone in Salford go out to the family and the community now and for the future.

“Immediately after the fire the community rallied round the family and the council, police, Victim Support and the fire service supported them and the family as they paid tribute to Michelle and the children. We will continue that support as we begin the lengthy process of trying to recover from this dreadful act. Salford people are strong and the community will come back from this but it will take time to heal.

“There is already talk in the local community of a lasting memorial to the children; if that is something the family wish to explore we will work with them to make that happen but we will be guided by them and their wishes.

“We are aware of issues raised both before and during the trial about how all the various agencies, including the council, interacted with the Pearson family. Salford Children’s Safeguarding Board has begun a serious case review which will look at all interactions with the family. Salford City Council will co-operate fully with that investigation. There are also further investigations by the coroner’s court and the Independent Police Complaints Commission and until all those investigations are concluded and the findings published, we cannot comment further.”

Wilmslow man found to have unlawfully killed his girlfriend in Handforth detained under hospital...