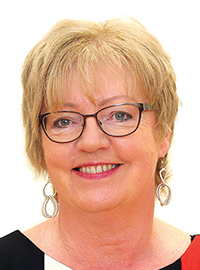 Tributes have been made to an Oldham Councillor who died of Pancreatic Cancer at the weekend.

A former secondary school teacher, Sue first came to Oldham in the 1970s to take a job in Chadderton and subsequently lived in Hathershaw, Glodwick and Springhead.

After teaching she worked in youth justice and education management at Rochdale Council before her recent retirement.

She had two adult sons who live in Oldham, and three grandchildren, and she also had caring responsibilities for her father.

As a Labour party candidate she was first elected to serve the Chadderton Central ward in 2012.

As part of her duties she served as chair of the Health and Wellbeing Board for Oldham as well as District Youth Champion, and she was a member of the Chadderton District Executive and Oldham Leadership Board.

In her health role, Cllr Dearden played a key part in supporting a range of key initiatives such as Get Oldham Growing.

Sue was also a proud equalities champion. Describing herself as a feminist she championed women’s’ rights issues and – having been a single parent and a carer – she was keen to support young women to be confident and ambitious, understanding the pressures many face in caring for their families.

Cllr Jean Stretton, Oldham Council Leader, said: “It’s incredibly sad to lose Sue and all our thoughts are with her family at this incredibly difficult time.

“I know her loss is felt by so many people. Sue was kind, positive, well respected and loved in every role she undertook, not just as a member of the council or party, but first and foremost as a mother, grandmother, carer and friend.

“She was a hard-working ward councillor for Chadderton Central and one that inspired people. She really made a difference in this borough through her work championing important social issues like health and wellbeing, education and women’s rights and that is her legacy.

“Although we all knew Sue was ill her passing is very difficult to accept. We were blessed and fortunate to have known her and she will be greatly missed.”

Books of condolence are being placed in the Rochdale Road at the Civic Centre and at Chadderton Wellbeing Centre for those wishing to pay their own tributes to Cllr Dearden.

Sue died of pancreatic cancer on Saturday and it was her wish that people make donations to Pancreatic Cancer Research Fund to help others in the future.

You can donate in person at her books of condolence, send cheques payable to Pancreatic Cancer Research Fund, PO Box 47432, London, N2 1XP, or donate online at www.pcrf.org.uk