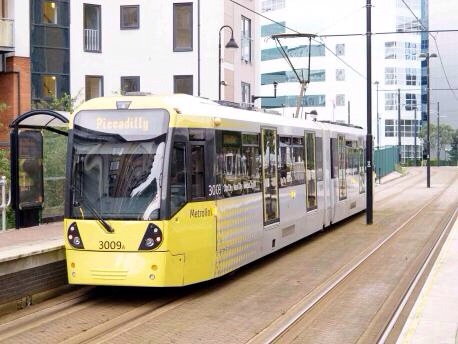 The new Metrolink line to Wythenshawe and Manchester Airport will launch before the year is out, more than twelve months ahead of schedule.

Trams will start to run along part of the route from Monday 23 June as the very first stages of a thorough testing and commissioning process get under way.

The 14.5km route, delivered by the MPT consortium, is one of the biggest live civil engineering projects in the country.

Several major purpose-built structures have been built as part of the programme, including a viaduct over the Mersey Valley, two new bridges over the M60 and M56, and the Ringway Road dual carriageway and underpass at Manchester Airport.

Services will initially run between Manchester Airport and Cornbrook, every 12 minutes.

Sir Richard Leese, leader of Manchester City Council, said: “The early opening of this vital new line to Wythenshawe and Manchester Airport is a tremendous boost for Manchester.

“For Wythenshawe, it will be a pivotal moment in the town’s regeneration which will significantly enhance its pull as a place in which to live and do business.

“For the airport, which is crucial to the fortunes of the whole of Greater Manchester, it will provide another attractive transport option for customers and improve links with the emerging Airport City development

The Airport line will bring the size of the Metrolink network to fifty seven miles serving 92 stops.