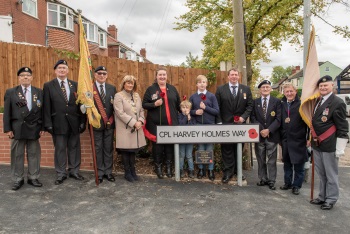 A new Tameside street has been named in honour of a local soldier killed in action in Afghanistan.

The family and friends of Harvey Holmes gathered in Hyde on Tuesday 18 September to celebrate his life and formally open Cpl Harvey Holmes Way. They were alongside Cllr Denise Ward, the Civic Mayor of Tameside, and Consort.

The street bearing Harvey Holmes’ name is a brand new road which is part of the St Mary’s Gardens development in Hyde Newton built by Wain Homes. This road has been named under the council’s Honour Our Fallen pledge.

Cpl Harvey Holmes tragically lost his life in 2010 while investigating a compound explosion close to Patrol Base Waterloo, Sangin, in Helmand Province.

In his five years with the Army, Cpl Harvey Holmes passed some of the most arduous courses on offer. He was a popular and capable soldier whose talents had been recognised through promotion within his regiment.

He was enlisted in the 1st Battalion 22nd Cheshire Regiment (which later amalgamated into the 1st Battalion of The Mercian Regiment) and had also served in Northern Ireland, Belize, the Falkland Islands and Iraq. During his time in Afghanistan he was attached to 40 Commando Royal Marines Battle Group.

When he died, Harvey Holmes was providing protection for his patrol as they investigated a compound east of Wishtan, close to Checkpoint Chakaw. He had been deployed to Sangin in April 2010 along with his company.
He was 22 years old and from Hyde, attending Astley High School in Dukinfield. Harvey Holmes enlisted in the Army in 2004.

He shared his family’s passion for narrow boats, and before joining the Army was a keen member of the Scout Association. Representatives from Tame Valley District were present at the opening.

Tameside has a long tradition of offering support to serving members and veterans of our Armed Forces.

In recent years, the Council has supported local armed forces personnel with employment and housing matters.
The formation of the Tameside Armed Services Community has also extended the help and advice available to those returning to civvy street.

Cllr Brenda Warrington, Executive Leader of Tameside Council, said: “We are delighted to have worked with Harvey’s family and Wain Homes to pro

Could you shed light on the hidden history of women’s football?