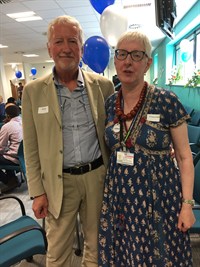 Since its launch in 2003, the organisation has helped more than 200 healthcare professionals, mainly doctors, gain employment in the NHS.

Reache North West – which is based at Salford Royal – supports doctors and nurses who often begin with no knowledge of the English language, right up until they requalify and are ready for employment in the NHS.

There are currently eight clinicians employed by Salford Royal who were supported by Reache.

Students must initially pass an English language exam before they can begin their clinical training. Clinical tutors, along with volunteer clinicians and junior doctor mentors from Salford Royal, help the students learn the necessary skills to work in a hospital or GP surgery.

Dr Maeve Keaney, Director at Reache, said: “Our students are often very experienced clinicians in their own country but for whatever reason, they are fleeing for their lives and their safety.

“They are very knowledgeable in their profession but they do need to adapt to their new setting and the culture here in the UK.

“All of our students receive a very thorough grounding here at Salford Royal and they are also bringing a lot of skills that in many cases, we can also learn from.”

It takes around two years to update a student’s clinical skills and they must also be registered with the General Medical Council at which point, they take up an honorary post for three months on a hospital ward or department.

Dr Mustafa Abu Rabia, from Palestine (Gaza Strip) joined Reache in 2004 and is now a Specialist Trainee in his 6th year of training to be a consultant. He was unable to return to his home country after completing his medical degree and said Reache was a safe haven during the asylum seeker process.

He added: “Reache helped me through such a hard time and kept me motivated to focus on what I wanted to do. I sat my exams and passed first time; I felt like I was a human being again.

“Thanks to Reache, I was able to get employment and get the grounding I needed to build on my future career.”

Reache has supported students from Sudan, Iraq, Syria and the Congo and many other countries. Many students also take up volunteering roles at care homes, charity shops and at park run events to immerse themselves in the local community.

Dr Keaney added: “Being involved in the local community helps our members to feel integrated and it is also helping to improve their language skills while providing valuable and much-needed support to local organisations.”