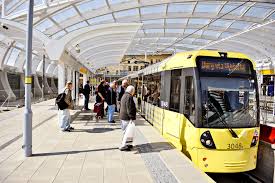 More than 200 workers on Greater Manchester’s Metrolink tram system will strike over four days in early June in a dispute over pay, Unite,  Britain and Ireland’s largest union, said today,

The workers, who cover three different groups,customer support who check tickets, engineering and business support, will strike from 21:00 on Friday 7 June until 05:59 on Monday 10 June.

They have voted by 96 per cent for strike action.

The union has called for constructive talks with the employer Keolis Amey Metrolink Ltd to resolve the dispute that will bring the 93-stop system to a halt, as the union acknowledges that the strike clashes with the sold-out Parklife Festival being staged the same weekend.

The company, which runs Metrolink on behalf of Transport for Greater Manchester, has offered between one and five per cent for the year starting January 2019 depending on which group a worker belongs.

Unite regional officer Steve Davies said: “The company has adopted a ‘divide and rule’ policy in offering different pay rises to separate groups which we won’t tolerate – we are seeking a substantial pay rise for all our non-driver members.

“The company has also tied in any offer to a serious erosion of current employment conditions. The bosses are expecting a lot for their current offer including a worsening of unsocial hours working and new rosters impacting on our members’ work/life balance.

“We are calling out the network controllers across the 62 mile system and without them the whole network will grind to a halt very quickly.

“We appreciate that the strike action is taking place during the popular Parklife Festival and travel disruption is on cards for festival goers – that’s why we are calling for urgent talks with the management to reach a fair settlement before the bands start playing.”

Costa to launch My First Job Workshop in Manchester